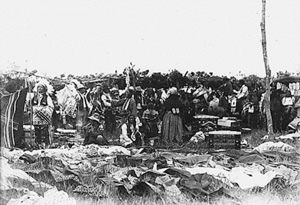 The word powwow is derived from the Narragansett language and refers to a gathering of Native people for the purpose of singing, dancing, celebration, and socialization. It consists of ceremonies, dance competitions, and social dancing. Many are large, annual events and have well-established reputations, such as those held in Calgary, Denver, and Oklahoma City. Powwows are characterized by the use of one or more groups of singers, which are called "drums," and the wearing of elaborate regalia during the dance portions of the event. The style of music and dance that has become standardized in many Great Plains powwows is termed "intertribal" because it is a hybridization of dance and music from several Native American groups. Powwows vary in size from giant affairs attended by people from a wide variety of locations on the North American continent, to small, local gatherings where the population of one community is the primary audience.

The history of the event demonstrates its dynamic nature. During the first part of the twentieth century, there was a great deal of interaction among Native peoples due to relocation on reservations and through increased availability of transportation technology such as the railroad. Native peoples maintained cultural identity by preserving traditional music and dance styles. Participation in World War I, World War II, and the Korean War gave Native American men who might have been members of warrior societies among their own people the opportunity to become active warriors. Traditional dances were held and songs were composed to honor these men. By 1955 there was a great deal of interest in artistic exchange among tribal groups in the Great Plains, who continued to celebrate their warrior societies through song and dance, especially in Oklahoma. These songs and dances were shared with members of neighboring tribes, and an amalgamation of musical and dance traits resulted that led to the contemporary intertribal powwow.

When these intertribal celebrations began, they did not possess the common elements that can be found today. Although there is still a large amount of variation in format, competition, and participation, many powwows in the Great Plains have an overall form that is predictable and understood by all participants. This form includes a wide variety of events held for specific reasons and, in many cases, in a specific order.

The most impressive event of the contemporary powwow is the Grand Entry, the first part of any dance session. During this time, all dancers who are to compete enter the powwow arena in a specified order. After the Grand Entry, a special ceremony usually takes place that includes the singing of a Flag Song and, sometimes, an Honor Song. After the songs the master of ceremonies may introduce important people at the event, and a prayer is frequently offered. This might be followed by a speech from a dignitary, such as the powwow princess or a visiting politician. During all of this ceremony, the dancers stand quietly in the powwow arena. At its close, the emcee usually calls for an intertribal dance, so that everyone may participate. Several such dances may occur before the competitions begin.

Competition dancing is divided into categories according to the type of songs performed by the drum (the singing group), the type of dance steps and regalia worn by the contestants, and the contestants' ages. Men's categories usually include traditional and fancy dancers. Women are divided into traditional, fancy, and jingle dress dancers. All categories are further classified by age into adult, junior, and tiny tot divisions. Awards for the competitions are presented for dancing technique, such as stopping on the correct foot with the last beat of the drum and appropriate composure during the entire powwow. Prizes may include cash, trophies, and a wide variety of material objects such as blankets, rifles, food, or household items.

A great diversity of music may be heard at any given powwow. Some of the musical styles include the Omaha dance, social dance, and intertribal. Songs are not improvised but are composed by singers who teach them to other members of the drum. These songs are then dispersed among the population through performance at powwows and through recordings. Songs have appropriate drumbeats that accompany them, including the parade beat, the Omaha beat, the social dance beat, accent or honor beats, and the drum roll. Each of these beats is distinctive, and aficionados will know immediately by the drumbeat which type of song is being performed. The speed of the beat varies according to the type of dance and the style of the drum. Distinctive differences exist between Northern Plains and Southern Plains styles, and these include a faster beat in the north and a slower beat in the south. These differences sometimes make it impossible for a northern-style dancer, for example, to compete while a southern-style drum is playing. For this reason, international drums often perform at powwows in a neutral style so that dancers from both the northern and southern traditions may compete simultaneously.

Competitions are the main focus of the powwow for some participants, but other types of activities occur at various points during the event. Giveaways are common, and intertribal and special dances are interspersed throughout the affair, giving noncompetitive dancers a chance to participate. Raffles are frequently held to raise money in support of the event or to help sponsor the next powwow. After the formal portion of the powwow, young dancers often get together in the late evening for a round of "forty-nine dances." The informal nature of the forty-nines contrasts with the relatively rigid structure of the other powwow dances. This is a time for celebration among the young adults who participate often into the early hours of the morning.

Contemporary powwows play an important role in the social and cultural life of Native Americans. They are a celebration of heritage and tradition that has survived in a unique form apart from the daily lives of the participants. Powwows engender a sense of community and belonging among the people who participate, and those who are on the powwow circuit look forward to making new acquaintances and renewing old friendships as much as to the singing, dancing, and competitions. Music and dance are natural media for dissemination of cultural information because they are so visible, and powwows and recordings of powwow songs disperse important features of Native American culture not only among Native American communities but also among members of other communities.