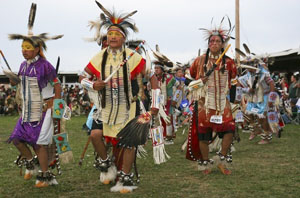 Crow Fair, called the "Tipi Capital of the World," is an annual event held the third weekend in August on the Crow Reservation in Montana. It is one of the largest Native American events in North America and is run by a committee of the Crow tribe. Crow Fair combines a celebration of Crow culture, reunion of family groups, powwow, rodeo, horse racing, and commercial vendors. Native Americans of various tribes and many non-Indian people, including visitors from around the world, gather to celebrate and enjoy themselves. There may be 1,000 tipis, along with wall tents, pickup campers, trailers, and mobile homes. Each family has its own camp area, and people visit and eat under arbor shades and awnings.

These camps surround an open circular dance arbor with bleachers. Immediately around the dance arbor are commercial booths that serve food as well as sell Native crafts, arts, supplies, and children's carnival toys. Social and popular dances are held for young people in the Round Hall. An all-Indian rodeo and horse races are held at the racetrack arena adjacent to the fairgrounds. Crow Fair runs four days for the tribe and general public. A fifth day is devoted to Crow tribal members and their immediate friends and includes dances, giveaways, feasting, and the Parade Dance around camp with a salute to the mountains.

Each morning there is a parade, and spectators line the edges of the road, sitting on folding chairs, in cars, or in the beds of pickup trucks, many holding umbrellas for shade. The procession is led by a color guard of Native American veterans. The main parade includes people on horseback, on foot, and riding on cars and floats. Most are dressed in powwow finery, wearing traditional Plains regalia, including fancy beaded vests, eagle-feather bonnets, shawls, and elk tooth dresses, mixed with cowboy dress. Many horses are outfitted with traditional Crow saddles, beaded or painted saddlebags, Pendleton blankets, beaded rifle bags, and cradleboards. Vehicles and floats also are covered with traditional finery; along the sides, draped banners declare titles of tribal or family affiliation. The floats have displays such as a small tipi and arbor with elders and children or a drum group with dancers. The paraders smile, wave to the people lining the roadside, and throw candy to the children. The current Crow Fair princess leads "visiting royalty" who have won princess titles at other reservations and powwows. Awards are given for the best dress outfits, decorated horses, and floats.

Drum groups, dancers, and spectators assemble at the central dance arbor for the afternoon and evening powwow. The grand entry is led by an Indian veteran color guard, followed by distinguished individuals, honored guests and elders, and then male traditional dancers, male fancy dancers, women traditional dancers, girl's shawl or fancy dancers, jingle dress, grass dancers, and tiny tots. The powwow includes announcements, jokes, dance competitions in various categories and age groups, and intertribal and social dances. Honor songs and dances, giveaways, and adoption and naming ceremonies occur. After the powwow, there are sometimes forty-nine dances and tipi doorway singing. The all-Indian rodeo and horse races are held at the nearby racetrack arena. The rodeo includes saddle bronc and bareback riding, bull riding, bulldogging, calf roping, team roping, and barrel racing. Quarter horse and Thoroughbred racing are featured. There is much betting on the outcomes of the races.

Crow Fair started in 1904, when the Bureau of Indian Affairs agent and Crow leaders agreed that a country fair format would help induce the Crows to become self-supporting farmers while at the same time allow the people to showcase aspects of Crow culture. Crow women exhibited traditional Native foods, clothing, and handicrafts. People brought ponies, calves, pigs, turkeys, and chickens for exhibit as well as potatoes, pumpkins, squash, grain, jellies, pies, bread, butter, and cakes. Schoolchildren exhibited basketry, embroidery, and various crafts and played band music. A committee of chiefs and elders scheduled entertainment events and arranged a parade, foot and horse racing, relay races, rodeo (including bucking broncos), and dancing to the beat of singers around drums. Storytelling of war deeds by veterans, victory dances, sham battles and reenactments, and the distribution of gifts to tribal members and visitors became popular. Prizes were given for the best-pitched and decorated tipis, tipi-pitching races, farm exhibits, horse work teams and wagons, buggies, and races.

Federal Indian policy at that time generally forbade traditional singing, dancing, and ceremonies, but the combination of agricultural assimilation and traditional culture coincided with public interest in tourism. Visitors included non-Indians as well as members of many other tribes. The fair became a successful national model for Indian events. After World War II the agricultural aspects of Crow Fair were dropped, and the combined Crow and modern pan-Indian event has grown to become one of the most popular cultural celebrations in the world.