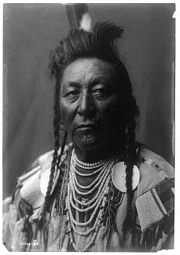 Plenty Coups (Alaxchiiaahush, or Aleck chea ahoos) was a Crow warrior, diplomat, and mediator. He was born in 1848 at "the cliff that has no pass" in present Billings, Montana. Also known as Bull Who Goes Into (Against) the Wind, he was a Mountain Crow. His parents died when he was about ten years old. Orphaned and in grief, he was encouraged by camp criers to go on vision quests. He was adopted by the Little People and guided by eagles, who became his guardians. In a vision in the Crazy Mountains he saw the buffalo disappear and be replaced by cattle, a windstorm destroy all trees except the one in which the chickadee lived, and himself as an old man sitting by a house.

By his mid-twenties Plenty Coups had accomplished each of four war deeds to achieve the distinction of chieftain, or "good man." He carried a Medicine Pipe and Pipe Holder's bag as a leader of the Fox Warrior Society. One of many Crows who scouted for the U.S. military, he was a leader in the Battle of the Rosebud on June 17, 1876. Years later he stated his reason for aiding the Americans: "[W]e plainly saw that this course was the only one which might save our beautiful country for us." In 1880 he traveled with five other Crow leaders to Washington DC. The main purpose was to negotiate the sale of the western part of the reservation and a Northern Pacific Railroad right-of-way up the Yellowstone Valley. At George Washington's home, he pondered the difficulties of his "small nation." Inspired by the visit, he later willed land in 1928 to be used as a park, recreation ground, and display of his possessions as "a reminder to Indians and white people alike that the two races should live and work together harmoniously." His house, a Montana state park, is a National Historic Landmark.

By 1890 Plenty Coups and Pretty Eagle were recognized as head chiefs of the tribe. Plenty Coups settled in Pryor Valley, on land he had seen in his vision, where he farmed, raised cattle and horses, and established a general merchandise store. He was involved in "pan- Indian" intertribal networks and fought the continual pressure to sell Crow land. In preparation for hearings on yet another bill for opening and settlement of the reservation in 1917, Plenty Coups and other leaders held traditional war ceremonies in a Washington dc hotel room, including burning buffalo chips and offering songs and prayers. He promoted Crow Fair and also led parades at regional fairs. He encouraged Crow support of U.S. efforts during World War I. Chosen to be the representative of all Indians and called "Chief of All Chiefs" for dedication of the Tomb of the Unknown Soldier at Arlington National Cemetery in 1921, he placed his war bonnet and coup stick before the casket; they are on display there today.

Following the example of the chickadee to be observant and learn from others, Plenty Coups lived according to his own Crow values and also accommodated non-Indian culture. He practiced traditional Crow religion, including the vision quest, sweat lodge, and Sacred Tobacco Society. He was baptized into the Catholic Church at St. Xavier on the Crow Indian Reservation. He was married several times, but his two children died young, so he and his wives adopted and raised other children. He considered all the Crows as his "children." He understood that education is important and donated part of his land for a school. His most famous statement was "Education is your most powerful weapon. With education you are the white man's equal; without education you are his victim." Plenty Coups passed to the "Other Side Camp" on March 4, 1932, at age eighty-four. Funeral services were held according to both Catholic and traditional Crow customs, including proclamation in the Crow language of his deeds. The tribe voted to honor him as their last traditional chief.