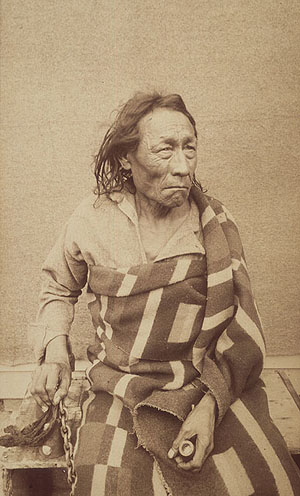 Big Bear (Mistahimaskwa) was a leader of the Plains Crees who carried on a nine-year struggle to gain better treaty terms for his people from the Canadian government. Born about 1825 to Ojibwa parents near Fort Carlton, Saskatchewan, Big Bear was part of a transitional camp that spent its summers on the open Plains but in winter hunted and trapped in the woodlands near Jackfish Lake, Saskatchewan. After the death of his father, about 1865, Big Bear became chief of a band of sixty-five lodges. In addition, he received a number of visions and was a religious leader who opposed the work of Christian missionaries.

In 1876 Big Bear refused to sign Treaty Number 6 with the Canadian government. Instead, he said he would wait five years to see if its promises were honored. As starvation began to beset the Crees, many young dissidents flocked to Big Bear's camp, and he became one of the most important chiefs on the Canadian Plains. During this time, he demanded better terms from the government but was unsuccessful. Finally, he was forced to sign the treaty in 1882 when his own sons rebelled against him.

In the spring of 1885, the Métis launched the North-West Rebellion and, at the same time, Big Bear's son, Little Bear (Ayimisis), joined with war chief Wandering Spirit (Kapapamahchakwew) to kill nine white residents of Frog Lake. Several others were taken prisoner. Big Bear tried to stop the killing and later protected the prisoners. However, as chief, he was convicted of treason and was sentenced to three years in prison. He became ill while imprisoned and was released after two years. He died within a year of his release.

Dempsey, Hugh A. Big Bear: The End of Freedom. Vancouver: Douglas and McIntyre, 1984.