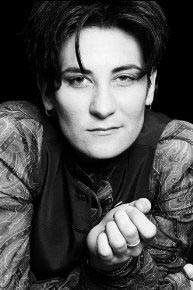 Singer and songwriter k. d. lang was born Kathryn Dawn Lang on November 2, 1962, in Edmonton, Alberta. Raised in the small town of Consort, she studied music for a year after high school and began performing professionally in Edmonton in 1981. Her recording career began with A Truly Western Experience in 1984 with her band, the Reclines. Claiming Patsy Cline as an alter ego, she cultivated an unconventional, occasionally frenetic, and irreverent stage presence during this period in her career. In 1984 she made her U.S. debut and began to tour internationally. Signed to Sire Records, she released Angel with a Lariat and Shadowland in 1987. "Crying," her duet with Roy Orbison, won her a Grammy in 1988 for best country music collaboration. Absolute Torch and Twang, released in 1989, sold 100,000 copies in Canada and 500,000 in the United States and earned her a Grammy in 1990 for best female country vocalist. In Canada she won three Juno Awards from 1987 to 1990.

Although clearly in the mainstream of country music, as demonstrated by the Grammys, Grammy nominations, and awards from the Canadian Country Music Association, lang has suggested that her music, along with that of many other Canadian country musicians, differs in subtle ways from the homogeneous Nashville product because of the ethnic influences– Irish, Scottish, Ukrainian–found on the Canadian Prairies. Three albums appeared in the 1990s: Ingenue (1992), All You Can Eat (1995), and Drag (1997). They represent a significant change in lang's musical style, described by one writer as country-punk turned pop-torch chanteuse. Unifying and to some extent determining the nature of the change has been her instrument, her voice: rich, flexible, and superbly controlled.