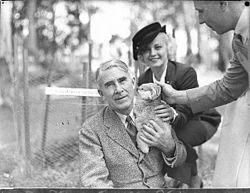 Zane Grey holds a Koala during a visit to Australia

Immensely popular in the 1910s and 1920s as a writer of Western romances such as Heritage of the Desert (1910) and Riders of the Purple Sage (1912), Zane Grey also wrote sporting and adventure novels and short stories. He was born Pearl Zane Grey on January 31, 1872, in Zanesville, Ohio. He practiced dentistry in New York City from 1896 to 1904 before traveling extensively in the West. He died on October 23, 1939, in Altadena, California.

Sometimes locale specific, sometimes not, Grey's narratives often travel the Great Plains. In The Trail Driver (1936), Texas Joe Shipman wins the love of orphan Reddy Bayne on an 1871 cattle drive from Texas to Dodge City. Tough young Andrew Bonning prevails with equally tough runaway Martha Ann Dixon in Wyoming (1953). The earlier U.P. Trail (1918) celebrates the building of the Union Pacific Railroad. Several Grey novels involve Texas Rangers. Wade Holden in Shadow on the Trail (1946) has to escape them to prove himself. In Lone Star Ranger (1915) Buck Duane flees from and then secretly joins the Rangers to clear his name. The close reader will find intriguing ironies in Grey; in both Heritage of the Desert and Lone Star Ranger conflicting and ambiguous laws call into question their very meaning.