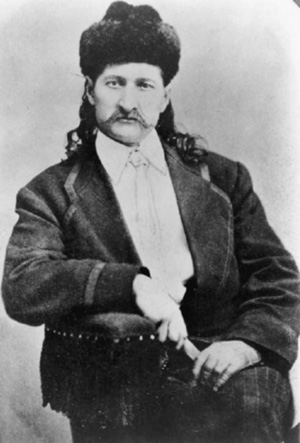 Born in Illinois in 1837 to a farmer and proprietor of a small store, James Butler Hickok grew up to become a gunfighter and lawman of legendary proportions in the West. He served as constable of Monticello, Kansas, in 1858, then worked as a teamster in the Great Plains before serving with the Union army as a wagon master, scout, and spy during the Civil War. Following the war he scouted for Custer's Seventh Cavalry and was a deputy U.S. marshal responsible for capturing army deserters and rustlers of government livestock. In August 1869 he was elected sheriff of Ellis County, Kansas, but that lasted only three months. During 1871 he was town marshal of Abilene. The next several years found him guiding Russian nobles on a buffalo hunt, gambling his way from one cow town to another, and performing in Buffalo Bill's Scouts of the Prairie theatrical production. In 1876 he joined the rush to the Black Hills, but he had no luck prospecting and spent most of his time drinking and gambling in Deadwood. While playing cards in the No. 10 Saloon on August 2, 1876, he was shot through the back of the head by Jack McCall. Wild Bill died instantly, still holding his hand of aces and eights.

Hickok was a legendary figure while still alive. He embraced, perpetuated, and added to his own legend and, alternately, was repulsed by it. He was an enigmatic figure who defies simple analysis. One thing is clear. He was a fearsome gunfighter: his accuracy was extraordinary, he shot equally well with either hand, he had great presence of mind in the face of death, and he gave no quarter. He shot to death seven men, not counting those he killed in the Civil War and in Indian fights.