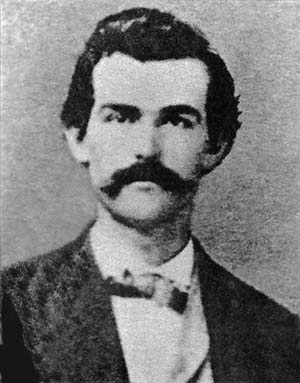 John Henry "Doc" Holliday, perhaps the most written about dentist in American history, was one of the most colorful and enigmatic characters on the nineteenth-century frontier. The frail, tubercular Georgian became a popular folk legend after participating in the famous gunfight outside the OK Corral. Holliday's image as a killer and peerless duelist has been embellished through countless newspaper and magazine articles, books, television shows, and motion pictures. While the Doc Holliday of fiction and folklore continues to be an enduring symbol of America's violent frontier past, the historical personality behind the myth remains an elusive, complex figure.

Doc Holliday was born on August 14, 1852, at Griffin, Georgia, the only son of Jane and Henry B. Holliday, a planter, lawyer, and politician. After attending dentistry school, Holliday opened a practice in Atlanta in 1872. Diagnosed with tuberculosis in 1873, he sought a healthier climate farther west. He settled in Dallas, Texas, and became a regular at the local gaming houses. He adapted well to the saloons and gambling halls and eventually became a full-time faro dealer. He left Dallas in 1875 after being involved in a shooting fray. Doc Holliday reportedly spent the years from 1875 to 1879 drifting from one frontier town to another, dealing faro and practicing dentistry in Plains communities such as Denver, Colorado; Las Vegas, New Mexico; Cheyenne, Wyoming; and Dodge City, Kansas. In Dodge he developed a close friendship with city policeman Wyatt Earp, whom he later followed to Tombstone, Arizona.

Holliday has had the reputation of being a superb marksman and one of the most deadly gunfighters of the Old West. Also said to have been handy with a bowie knife, he has been credited with as many as thirty-five killings. For example, he reportedly shot to death a soldier at Jacksonboro, Texas, knifed a gambler in Denver, and killed another man in Las Vegas, New Mexico. These stories have little basis in fact, having been penned years after the alleged acts occurred. Bat Masterson, for example, helped strengthen Holliday's image as a killer in a popular 1907 article. Holliday also helped popularize his own image as a dangerous killer. The frail, chronically ill Holliday was actually a poor shot who carefully nurtured his reputation as a skilled gunman and killer to deter any would-be gambling cheats, thieves, or assorted hard cases. His only documented killing, the shotgun slaying of Tom McLaury, took place during the OK Corral fight.

While Doc Holliday and others might have exaggerated his notorious reputation, he was certainly not all bluff. A product of the southern dueling tradition, Holliday often resorted to violence to settle disputes. For example, when Billy Allen approached him in a Leadville, Colorado, saloon in 1884 to collect a five-dollar bet, the insulted Holliday opened fire, leaving Allen with a nasty flesh wound. Also on October 26, 1881, in the most written about gun battle of the nineteenth-century American West, Holliday stood side by side with the Earp brothers at the OK Corral in a fight that killed three members of the Clanton gang. In the period after the Tombstone gunfight, he was alleged to have helped Wyatt Earp murder Clanton henchmen Frank Stillwell and Florentino Cruz, although he never stood trial for either crime. Doc Holliday died from tuberculosis on November 8, 1887, in Glenwood Springs, Colorado.