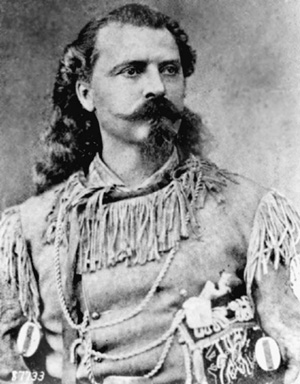 Buffalo hunter, scout, soldier, and western showman, William F. Cody is one of the most widely recognizable figures to emerge from the nineteenth-century Great Plains. More popularly known as "Buffalo Bill," Cody was born on February 26, 1846, in Scott County, Iowa. The Cody family moved to the Great Plains in 1854, settling near Fort Leavenworth, Kansas Territory. When his father, Isaac, died in 1857, Cody left school to help support the family. He held a variety of jobs, including oxteam driver, express messenger (for the transportation firm of Russell, Majors, and Waddell), and Pony Express rider. During the early years of the Civil War he operated with an irregular Kansas-based militia unit, and in 1864 he enlisted as a private in the Seventh Kansas Volunteer Cavalry, seeing action in Missouri, Arkansas, Kansas, and Tennessee. While stationed in St. Louis he met and married Louisa Frederici; the couple had four children.

In the years after the Civil War, Cody ran a hotel, drove a stagecoach, and worked periodically as a scout and guide for the army. In 1867-68 Cody earned the nickname "Buffalo Bill" by supplying buffalo meat to the Kansas Pacific Railroad; he killed roughly 4,280 bison during his eight-month contract. From 1868 to 1872 Cody served as a civilian scout for the Fifth United States Cavalry. He fought in at least nineteen battles against Plains Indians and was awarded the Medal of Honor (though in 1916 a congressional act removed his name and all other civilian winners from the rolls). In 1872 Gen. Philip Sheridan assigned Cody to guide a buffalo hunt for the Grand Duke Alexis of Russia. This highly publicized hunt, along with an 1869 serial story in the New York Weekly by dime novelist Ned Buntline (entitled "Buffalo Bill, the King of the Border Men"), made Cody a national hero and helped set the stage for his acting career. Cody made his first stage appearance in 1872, when he appeared in Buntline's Scouts of the Prairie. For the next decade Cody scouted for the army, guided hunting parties, and toured as an actor with various shows.

Cody launched his Wild West show on May 17, 1883, in Omaha, Nebraska. Buffalo Bill's Wild West show operated from 1883 to 1913, touring Europe and appearing at diverse American venues, including Madison Square Garden in New York City (1886) and the Chicago World's Fair (1893). In 1899 alone the show traveled more than 11,000 miles and gave 341 performances in 132 cities. Cody's outdoor extravaganza included romanticized reenactments of the Pony Express and the Battle of Summit Springs, horse races, roping demonstrations, gunfights, and target shooting. The cast of characters included Sitting Bull (the Hunkpapa Lakota leader), Annie Oakley ("Little Sure Shot"), and Buck Taylor ("King of the Cowboys"). Although Cody's show was a profitable business operation, he was a poor businessman, and by 1913 his show had failed. Heavily in debt, Cody toured as the "main attraction" for other Wild West shows until 1916.

Cody was both a real frontier hero who participated in the conquest of the American West and a western showman who promoted and perpetuated the "winning of the West" as a romantic venture. Buffalo Bill Cody died in Denver, Colorado, on January 10, 1917.

Rosa, Joseph, and Robin May. Buffalo Bill and His Wild West. Lawrence: University Press of Kansas, 1989.

Previous: Carhenge | Contents | Next: Colony of the East