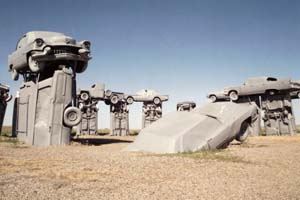 Carhenge is a remarkable piece of outdoor sculpture in a field just north of Alliance, Nebraska. The piece is composed of thirty-eight cars, dating from the 1950s and 1960s, painted gray, with some upended and partly buried in the ground so that the arrangement of the cars is roughly similar to the arrangement of the stones in Stonehenge, the ancient monument in England.

Jim Reinders and other family members were inspired to create an automotive representation of Stonehenge on Reinders's farm during a family reunion in 1987. The sculpture generated some controversy, with neighbors calling for a junkyard fence to enclose what they perceived as an eyesore on the rural landscape. The conflict was resolved when the city council of Alliance granted a zoning variance, and the site became a popular tourist attraction. It is visited by about 80,000 people annually and is maintained by a nonprofit group, Friends of Carhenge. The ten-acre site is two and a half miles north of Alliance on U.S. Highway 385. The site has parking, shaded picnic tables, and paths for visitors to wander among the cars. Like Stonehenge, Carhenge is home to a number of ceremonies and solstice celebrations.