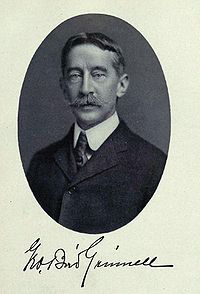 George Bird Grinnell was not from the Great Plains—he was born into a wealthy family in Brooklyn, New York, on September 20, 1849– but his studies of Plains Indians, and especially his role in the preservation of their histories, are fundamental to the region's legacy.

A mediocre student, Grinnell nevertheless graduated from Yale in 1870. That same year his interest in the Great Plains was kindled during a paleontology expedition along the route of the Union Pacific Railroad when he met William F. Cody and accompanied the Pawnees on a bison hunt. He was with George Armstrong Custer in the Black Hills in 1874 as a naturalist, and later, as editor of Forest and Stream, he shaped the early years of the American conservation movement. It was his publications on Native American customs and oral traditions, however, that particularly distinguished his life.

Starting with Pawnee Hero Stories and Folk-Tales (1889), and continuing through Blackfoot Lodge Tales (1892), The Cheyenne Indians: Their History and Ways of Life (1923), and By Cheyenne Campfires (1926), Grinnell collected and preserved the Indians' own histories with a sensitivity that was often lacking in the studies done by his contemporaries. While he shared his contemporaries' social Darwinist views that Native Americans had to give way to "civilization," and while he may not, as Richard Levine has argued, really have understood the implications of the "folktales" he collected, Grinnell let the Pawnees, Blackfeet, and Cheyennes tell their own stories, in their own way. Those stories survive as vivid insights into their views of themselves and of their position in nature.

Although he spent portions of most years in the Great Plains learning and recording (and serving as treaty commissioner for the U.S. government), Grinnell continued to be based in New York City. He died there on April 11, 1938, having suffered a series of heart attacks over the previous decade.