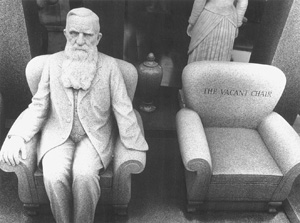 Portion of the Davis Memorial in Hiawatha, Kansas

In Wyuka Cemetery in Lincoln, Nebraska, an aircraft pioneer is buried beneath the smashed propeller of his plane. Nearby, in Nebraska City, a prominent insurance salesman rests next to a life-sized replica of his rolltop desk, and the founder of Arbor Day, J. Sterling Morton, is remembered by an exquisite twelvefoot limestone tree. A Garden City, Kansas, boy who loved his car is buried under the actual engine, and his name appears on the valve cover. Another Kansan, from Attica, used his tombstone to rail against the evils of the Democratic Party. In the small town of Hiawatha a husband and wife are depicted at every stage of their lives together in an enormous ensemble of statuary that cost a fortune during the Great Depression. A young man from Tulsa, Oklahoma, poses on his motorcycle, and an inscription below the porcelain photograph says simply, "I'd rather be drag racing." A traveling salesman from Lincoln, Kansas, is symbolized by a sculpted suitcase and the misspelled inscription, "Here is where he stoped last."

Grave markers are erected for the departed, but it is the living who are truly served by these monuments. Ritual burial of the dead and the marking of this passage are defining phenomena for virtually all of civilization. The humble tombstone provides a venue for the listing of cultural and spiritual values, and a chance for individuals or groups to record their grief and voice their hope. In many cases they also provide humanity with a welcome excuse for artistic expression. In the Great Plains, skillful and passionate people have left such distinctive monuments in the cemeteries that dot the landscape from Texas to Canada.

Although professional sculpture from Europe was sometimes imported by grieving families, most grave markers in the Great Plains were made by vernacular artisans working with local materials. Those in wagon trains and in fly-by-night mining camps carved markers quickly from wood. Immigrant Spanish stonecutters created decorative Catholic crosses, while their northern European counterparts imitated the illustrated tablets of England. Germans who had lost the sponsorship of Catherine the Great emigrated from Russia and erected iron crosses much like those in the Old Country, but in western Kansas many of these were produced using plumbing pipe and other utilitarian provisions. Epitaphs were brought from the British Isles and gradually infused with an American flavor, providing the visitor with a poetic glimpse of the deceased's character, or at least the sensibilities of those who had loved him. Italian immigrants brought a tradition of statuary with them, contributing angels and portraiture, executed in the round. Poorer enclaves and subcultures with no tradition of sophisticated sculpture would resort to concrete and other mixed media, but all of these efforts would shine with creativity compared to the cookie-cutter granite stones that emerged later in the twentieth century.

As might be expected, small town and rural cemeteries bristled with orthodox religious symbolism and Gothic gingerbread. Stones featured the anchor, a symbol of hope, fingers that pointed to heaven, and the weeping willow tree, which, like the Christian church, flourished in every part of the world. Jewish stones abounded with graven images, including the hands of benediction that identifies the Kohanim, the traditional priests of Israel, the lion of Judah, and the cup of the Levites. Later, urban mausoleums sported Egyptian Revival motifs or Art Deco designs. Generic symbols for death, such as the spilled flowerpot, the broken urn, and the inverted torch, appeared as society moved to a more secular view of life. Firemen, policemen, and fraternal organizations set up umbrella monuments to preside over their casualties. The Woodsmen of the World sold insurance policies to thousands of frontier families and erected grave markers in the form of tree stumps or stacked logs with individual names, resembling God's cord wood for the final blaze of judgment. Rows of lambs pointed out the frightful attrition that faced children on the frontier. Young women died in childbirth and were remembered by low-relief roses carved in limestone.

In the mid–twentieth century, cemeteries began to imitate the tract housing of the suburbs, and identical stones made of granite became almost universal. Soon these vertical markers would be laid flat so that lawn mowers could more easily be used. The cemetery became more a business and less a community institution. Finally, tombstones would be eliminated altogether, replaced by plaques and subterranean receptacles for the temporary use of flowers.

Happily, Americans have risen up against this unnatural anonymity. Images on markers are again attempting to portray the individual person, and porcelain photographs have reappeared. In the Great Plains it is now not unusual to see a farmer's grave marker that features his tractor, or some manifestation of the land itself. Outstanding older monuments are finally being sporadically sheltered and preserved. The grave marker is an important way for us to tell the next generation who we were and to help preserve our collective cultural identity.

Marion, John Francis. Famous and Curious Cemeteries: A Pictorial, Historical, and Anecdotal View of American and European Cemeteries and the Famous and Infamous People Who Are Buried There. New York: Crown Publishers, Inc., 1977.