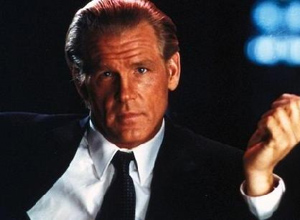 Born in Omaha, Nebraska, on February 8, 1941, Nick Nolte was a star athlete in high school who won a football scholarship to Arizona State University. Over the next several years he drifted in and out of numerous college programs before abandoning plans for a professional football career.

While studying at the Pasadena Playhouse, Nolte came to the attention of a drama coach who encouraged him to study at Stella Adler's Academy. Believing that the coasts were over-populated with talented actors, Nolte sought opportunities to develop his acting skills with various regional theater companies. He worked for more than a decade with companies in Denver, Chicago, and Minneapolis. After a few minor television roles in the early 1970s, Nolte landed the pivotal role of his career (Rich Man, Poor Man, ABC [1976]), which garnered him an Emmy nomination.

Hollywood noticed his phenomenal audience appeal, and Nolte began regular film work. Although much in demand as a romantic lead (The Deep, 1977; Prince of Tides, 1991), Nick Nolte has almost always shunned purely commercial fare in favor of roles that examine the darker, more troubling elements of the human spirit. As a result, he is more often seen as a complex and often threatening antagonist (Q&A, 1990) than a romantic leading man. Even his more romantic turns (as in Afterglow, 1997) examine a tortured psyche with enormous depth and realism.