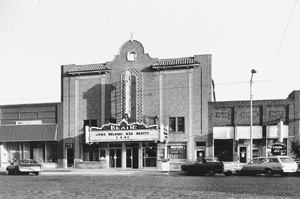 The first regular cinema opened in Pittsburgh, Pennsylvania, in 1905. Movie houses began appearing in the Great Plains shortly thereafter; for example, the newly incorporated town of Lubbock, Texas, boasted its first movie house, the Orpheum, in 1909. By World War I movie houses were common fixtures in communities across the Plains.

As in the rest of the nation, movie houses provided entertainment for Plains folk, that is, when proprietors could get films. Early newspaper ads promised nightly shows during the week and matinees on Saturday, tempered with the caveat "when available." Nevertheless, even irregular movie schedules provided substantially more entertainment than other sources. Radio would not be widespread on the Plains for another two decades, television for another four. Though many small communities had an opera house, which mostly hosted musicals and drama and variety shows, regular performances were difficult to support, and traveling companies–tent shows and circuses–came to town no more than once or twice a year.

Besides, the movies provided a different kind of entertainment, and that difference was important to the isolated peoples of the Plains. First, the occasion of seeing a movie was a social event in and of itself, a time and place to visit with widely scattered neighbors and friends. But while the movie house was a great place to socialize, Plains folk also found there satisfaction for their staunch independence, that collective character trait that more than any other marks this peculiar American tribe. In the anonymous darkness of the theater, separated by armrests, with all eyes turned toward the images flickering on the screen, moviegoers could escape to a bigger world, a world of their own choosing. Unlike the traveling shows and local stage offerings, which catered to narrow regional tastes and attitudes, motion pictures were crafted for a wide audience. There were new and novel sights and new and novel ideas. In the movie house, the warm smell of buttered popcorn and the soft mechanical purr of the projector meant magic. If it was hard to keep 'em down on the farm after they'd seen Paree, it was harder still when Paris, and London and Rome and New York, could be seen almost anytime without leaving the county, and for little more than a dime.

But because motion pictures came along at roughly the same time that settlements were still appearing on parts of the Plains, movie houses also had a practical side. Early on, they provided much-needed facilities for public use, with local governments, churches, schools, and civic clubs all relying upon them for meeting space. Soon they became important to the local economy, bringing people to town, then giving them something to do when they got there. Before long, a nice, modern movie house became a necessity to chambers of commerce and other community boosters. Rounding out the practical side of things, movie newsreels were an important source for national and international news until television made them obsolete.

Movie houses retained their central place in Great Plains communities, both large and small, through the Dust Bowl, the Great Depression, and two world wars. In the cities, they remain today in roughly the same numbers. In Lubbock, for instance, the number of inhabitants per movie screen–a not-so- scientific but commonsense yardstick–has stayed consistently between 3,000 and 4,000 over the past ninety years.

That said, movie houses themselves have all but disappeared. The newsreels are gone. And if the movies themselves still serve Plains peoples, that service is offered in the sterility of the modern multiscreen cinema or the isolation of the television set. In the cities, small neighborhood theaters have been replaced by large multiscreen facilities. Outside the cities, movie theaters of any kind are rare. Too many people have moved away, and those who remain rent videotapes and purchase satellite receivers.

Yet the movie house isn't quite dead. In Lubbock there's the Cactus; in Claude, Texas, the Gem, which was featured in the movie Hud; in Dalhart, Texas, it's the La Rita; and in McCook, Nebraska, the Fox. In communities across the Plains, large and small, old theaters are being renovated and put back to use, though not for the showing of motion pictures. Instead, they're providing venues for plays and concerts and other live performances, and, once again, bragging rights for their towns. Even the Royal Theater, the subject of Larry McMurtry's The Last Picture Show, is being rebuilt as an arts center for the town of Archer City, Texas. Perhaps there's some magic still.