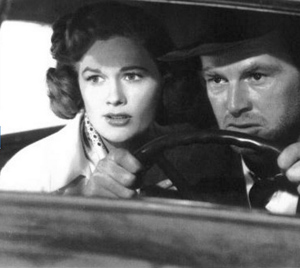 Coleen Gray was born Doris Jensen on October 23, 1922, in Staplehurst, a small town in eastern Nebraska. She attended Hamline University in St. Paul, Minnesota, where she became interested in dramatics. After a series of appearances in little theaters, she landed her first, uncredited role in the Hollywood musical State Fair (1945). The following year she had a bit part in yet another musical comedy, Three Little Girls in Blue (1946), also uncredited. In 1947, however, she appeared as the honest, faithful wife of criminals in two famous films noir, Kiss of Death and Nightmare Alley, in which she established herself as a competent actress capable of playing leading roles. Perhaps her most complex role was that of the abusive nurse, Ann Sebastian, in the disturbing noir The Sleeping City (1950), about corruption in a large city hospital. She also appeared in many Westerns and action films, among them Howard Hawks's Red River (1948), in which she played Fen, the lovely woman whom Thomas Dunson (John Wayne) leaves behind, in effect condemning her to death.

In all, Gray appeared in about thirty-eight motion pictures, making very few after 1960, the year she was cast in the Universal horror film The Leech Woman, a mediocre picture in which she was quite good. She continued to appear on television, playing guest roles in various series, but these appearances also diminished, and after 1972 she retired from acting altogether. She made a brief return with a role in Cry from the Mountain (1986), made by the Reverend Billy Graham.

Previous: The Grapes of Wrath | Contents | Next: Harlow, Jean