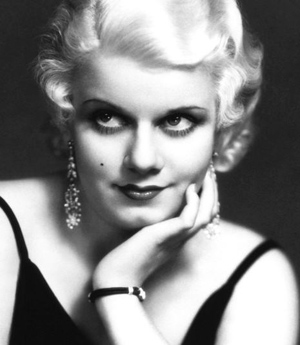 Jean Harlow, the platinum blond embodiment of sexual glamour in Hollywood's Golden Age, was born Harlean Carpenter in Kansas City, Missouri, on March 3, 1911. An only child doted upon by her dentist father and domineering mother, Harlean lived in a lavish Kansas City home and summered at her grandparents' twenty-five-room Bonner Springs, Kansas, retreat. Her parents' divorce in 1922 left Harlean alone with her mother, so at sixteen she eloped with wealthy Charles McGrew II and moved to Beverly Hills, California. Her mother followed, broke up the marriage, and persuaded Harlean to find work in films. Assuming her mother's maiden name, stunning Jean Harlow achieved instant stardom in Hell's Angels (1930), an aerial drama financed and directed by Howard Hughes.

Two years later, Hughes sold Harlow's contract to Metro-Goldwyn-Mayer, where her knack for comedy surfaced in Red-Headed Woman and Red Dust (both 1932). Meanwhile, her two-month marriage to mgm executive Paul Bern ended with his suicide in their home. Braving rumors of impotence, bigamy, and foul play, Harlow not only survived the scandal but emerged more popular than ever, becoming one of mgm's most important and beloved stars in hits like Dinner at Eight (1933), Bombshell (1933), China Seas (1935), and Wife vs. Secretary (1936). Contrary to her provocative screen persona, Harlow was known to friends and coworkers as "the baby"; at the height of her stardom, she still lived with her mother.

Harlow's private life was chaotic and unhappy. A third marriage to MGM cameraman Harold Rosson in 1933 lasted eight months, while a three-year relationship with actor William Powell was marred by his refusal to marry. Already an alcoholic, at twenty-six Harlow succumbed to kidney failure, the result of an undiagnosed poststreptococcal infection. Her agonizing death on June 7, 1937, was widely attributed to her Christian Scientist mother's refusal to seek medical aid; in truth, doctors were present, and Harlow died in a hospital, but at the time no treatment existed to save her.

Underrated in her own lifetime, Jean Harlow is now considered a unique and irreplaceable talent; once notorious, her bleached hair has become a fashion staple.