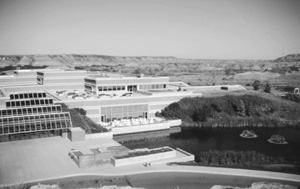 There are more than 1,000 museums in the Great Plains, and they tell many stories–how the region was formed, the history of its Indigenous inhabitants, the process of exploration and settlement by immigrants.

The center of the continent is marked by the Geographical Center Historical Museum (Rugby, North Dakota), in the heart of the Great Plains. Some museums document the big changes in the region. The Royal Tyrrell Museum of Paleontology (Drumheller, Alberta) presents a vivid picture of evolution in the Great Plains, from bacteria to dinosaurs. The changes wrought by western agricultural practices are depicted in the Cattle Raisers Museum (Fort Worth, Texas), the Canadian National Historic Windmill Centre (Etzikom, Alberta), and the National Agricultural Center and Hall of Fame (Bonner Springs, Kansas). The Gem of the West Museum (Coaldale, Alberta) tells the interrelated story of irrigation and European settlement. Museums devoted to the settlers include trail sites, sod houses, historic buildings, pioneer villages, and shrines to cowboys and farmers. The Great Plains is dotted with historic forts and military museums, including the Fort Casper Museum (Casper, Wyoming), the Fort Concho National Historic Landmark (San Angelo, Texas), and the Little Bighorn Battlefield National Monument (Crow Agency, Montana). In Oberlin, Kansas, the Last Indian Raid Museum commemorates the last battle between settlers and Native Americans in the state (in 1878); the French Legation Museum (Austin, Texas) recalls Texas as a French colony. Cowboy museums include the National Cowboy Hall of Fame and Western Heritage Center (Oklahoma City, Oklahoma), the Boot Hill Museum (Dodge City, Kansas), and the Pro Rodeo Hall of Fame and Museum of the American Cowboy (Colorado Springs, Colorado).

Other museums interpret modern agents of change. Chevyland U.S.A. (Elm Creek, Nebraska) features a working collection of all Chevrolet models. The petroleum industry is the subject of the Norman #1 Museum in Neodesha, Kansas (site of the first commercial oil well west of the Mississippi) and the Iraan Museum (in Alley Oop Fantasy Land Park, Iraan, Texas). The rise of suburbia is detailed in the Johnson County Museum (Shawnee, Kansas). The museum's collection includes a fully furnished all-electric house from the 1950s, with reenactors portraying family members.

Great Plains museums also record the changes in particular places that have shaped local history. There are hundreds of small museums and historic sites such as the Grant County Museum (Elgin, North Dakota) and the Rocky Ford Historical Museum (Rocky Ford, Colorado), often run entirely by volunteer labor. These institutions preserve local heritage. In all, about 77 percent of Great Plains museums are history museums, historic sites, and general museums devoted to one place or region. Some are comprehensive institutions with large-scale exhibitions, collections, archives, and conservation facilities such as the Kansas Museum of History (Topeka, Kansas), the Nebraska State Museum (Lincoln, Nebraska), and the Panhandle- Plains Historical Museum (Canyon, Texas). Most history museums are smaller, such as the Middle Border Museum of American Indian and Pioneer Life (Mitchell, South Dakota) and the Otoe County Museum of Memories (Syracuse, Nebraska). The Tsa Mo Ga Memorial Museum (Plains, Texas) receives only about thirty visitors a year.

Several Great Plains museums are known worldwide as research institutions. Among these are the Natural History Museum and Biodiversity Research Center at the University of Kansas (Lawrence, Kansas), the Joslyn Art Museum (Omaha, Nebraska), and the Kimbell Art Museum (Fort Worth, Texas). About 8 percent of Great Plains museums are art museums. Another 3 percent focus on natural history, 2 percent are devoted exclusively to Native Americans, and 4 percent are zoos or botanical gardens. Specialized museums (7 percent) include the World Figure Skating Museum and Hall of Fame (Colorado Springs, Colorado) and Big Well, a museum about the world's largest hand-dug well (Greensburg, Kansas). The Parade of Presidents Wax Museum is in Keystone, South Dakota.

Although most museums are federal, state, or local nonprofit institutions, some are private tax-exempt corporations. These may be large—the Harold Warp Pioneer Village Foundation (Minden, Nebraska) numbers among its collections at least 350 cars, 50,000 historical items, and a Norman Rockwell collection. Most are smaller and more modest in scope such as the Galloping Road Compound and Poker Alley at Harbor Ranch (Dripping Springs, Texas).

The spirit of Willa Cather thrives in museums. Her childhood home (the Willa Cather State Historic Site) and other locations in Red Cloud, Nebraska, invoke her writings. The stories of her immigrant characters are told in diverse places such as the Museum of the American Historical Society of Germans from Russia (Lincoln, Nebraska) and the Wilber Museum (Wilber, Nebraska).

A few museums are monuments to American eccentricity, including the Garden of Eden, a house built from limestone logs surrounded by an allegorical sculpture garden (Lucas, Kansas). The Robert L. More Bird Egg Collection (Vernon, Texas) houses 10,000 bird eggs. The Great Plains is the birthplace of Kool-Aid, which is depicted in an exhibit in the Hastings Museum (Hastings, Nebraska). This is a big museum in a small community, with three floors of exhibits and an imax theater. The museum's founder is buried in the basement.

Among the most specialized Great Plains museums are the Museum of Independent Telephony and the Greyhound Hall of Fame (both in Abilene, Kansas) as well as the Boys Town Hall of History (Boys Town, Nebraska). There is America's Shrine to Music Museum (Vermillion, South Dakota), the William A. Quayle Bible Collection at Baker University (Baldwin, Kansas), and the Strategic Air Command Museum (Ashland, Nebraska). The Soukup and Thomas International Balloon and Airship Museum is in Mitchell, South Dakota; the Appaloosa Horse Club Senior Citizens Museum and Archives can be found in Claresholm, Alberta.

What all of these museums have in common is their commitment to study, preserve, and exhibit real things, be they hubcaps, projectile points, fossil sea urchins, or rubber horseshoes. A museum gives its audience a sense of place and purpose. Museums interpret the past to inform the future.