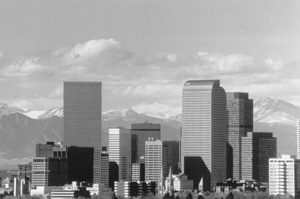 Denver, the capital of Colorado, was established by a party of prospectors on November 22, 1858, after gold was discovered at the confluence of Cherry Creek and the South Platte River. The town founders named the dusty crossroads after James W. Denver, governor of Kansas Territory, of which eastern Colorado was then a part. Other gold discoveries sparked a mass migration of some 100,000 people in 1859–60, leading the federal government to establish Colorado Territory in 1861.

The "Mile High City's" aggressive leadership, spearheaded by William N. Byers, founding editor of the Rocky Mountain News, and Territorial Governor John Evans, insisted on the removal of the original inhabitants, Cheyennes and Arapahos, from the area. Denverites then built a network of railroads that made their town the banking, minting, supply, and processing center for Colorado and neighboring states. Between 1870, when the first railroads arrived, and 1890, Denver's population grew from 4,759 to 106,713. In a single generation it became the second most populous city in the West, second only to San Francisco. Although initially founded as the main supply town for Rocky Mountain mining camps, Denver also emerged as a hub for High Plains agriculture, with breweries, bakeries, and meatpacking and other food-processing plants as well as farm and ranch equipment, barbed-wire, and windmill manufacturing.

Economic depression during the 1890s and repeal of the Sherman Silver Purchase Act in 1893 abruptly ended Denver's first boom. Growth began again after 1900 but at a slower rate. Stockyards, brickyards, canneries, flour mills, and leather and rubber production powered the city. Of the many Denver-area breweries, only Coors has survived, and it is now the nation's third largest producer.

Regional or national headquarters of many oil and gas firms fueled much of Denver's post.World War II growth and resulted in an eruption of forty- and fifty-story high-rises downtown in the 1970s. Denver's economic base has also come to include skiing and tourism, electronics, computers, aviation, and the nation's largest telecommunications center. As the regional center of a vast mountain and Plains hinterland, Denver boasts more federal employees than any city except Washington dc. Since the 1940s, the large federal center, augmented by state and local government jobs, has stabilized the city's boom-and-bust cycle, but an overreliance on a nonrenewable resource returned to haunt the city during the 1980s oil bust. When the price of crude oil dropped from $39 to $9 a barrel, Denver sank into a depression, losing population and experiencing the highest office vacancy rate in the nation. Prosperity has since returned.

Visually, Denver is notable for its predominance of single-family housing and its brick buildings. Good brick clay underlies much of the area, while local construction lumber is soft, scarce, and inferior. Even in the poorest residential neighborhoods, single-family detached housing prevails, reflecting the western interest in "elbow room" as well as the spacious, relatively flat High Plains site, where sprawling growth in all directions except west is unimpeded by geographic obstacles.

Denver always has been obsessed with transportation systems. Fear of being bypassed began early when railroads and later airlines originally avoided Denver because of the 14,000-foot-high Rocky Mountain barrier just west of town. To secure Denver's place on national transportation maps, the city opened a new five-billion-dollar airport in 1995. The fifty-five-square-mile Denver International Airport is the nation's largest in terms of area and capacity for growth, prompting boosters to call it the world's largest. Denver is a sprawling city in a state of long distances and mountainous obstacles. To tackle those distances and tough terrain, Coloradoans have become dependent on cars. Denver has one of the highest per capita motor vehicle ownership rates in the country, with almost one licensed vehicle for every man, woman, and child. In the 1990s Denver built an outer ring of freeways, which immediately became congested. Even after the Regional Transportation District began building a light-rail system, highway congestion has remained the number one complaint of many Denverites.

By 2000 the metro area had reached a population of 2.1 million, three-fourths of whom live in the suburban counties of Adams, Arapahoe, Boulder, Denver, Douglas, and Jefferson. Roughly 20 percent of the core city population have a Spanish surname, 13 percent are African American, 2 percent Asian, and 1 percent Native American. Denver has elected Latino (Federico Pena, 1983-91) and African American (Wellington Webb, 1991-2003) mayors in recent years and has enjoyed relatively smooth race relations. Notable institutions in the city include the Denver Museum of Natural History, the Denver Public Library, the Colorado History Museum, the Denver Art Museum, and the Denver Center for the Performing Arts as well as the U.S. Mint and major-league baseball, basketball, football, hockey, and soccer teams.

The "Rocky Mountain Metropolis" boomed during the 1990s as the eastern suburb of Aurora became Colorado's third largest city and the western suburb of Lakewood became the fourth largest. Even the core city and county of Denver gained population in the 1990s for the first time since the 1970s, climbing to 555,000 in the 2000 census. Thanks to landmark districts preserving venerable business and residential areas as well as the 1990s opening in the core South Platte River valley of Coors Baseball Field, Elitch Gardens Amusement Park, Ocean Journey Aquarium, the Pepsi Athletic Center, and many new housing projects, downtown Denver is booming along with its suburban fringe at the dawn of the twenty-first century.