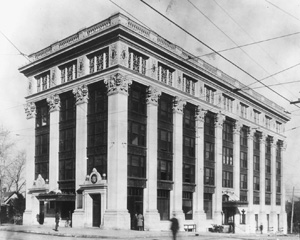 Solomon Andrew Layton was a prolific architect of early statehood Oklahoma. Twenty-two of his buildings are listed on the National Register of Historic Places, a record unmatched among the state's architects. Born in Red Oak, Iowa, on July 22, 1864, he died in Oklahoma City on February 6, 1943.

Layton began practice in Denver in 1887 and moved to El Reno in central Oklahoma in 1902. Three years later he moved to Oklahoma City, where he headed an architectural firm until his death. Alone and with different partners, he designed more than 100 public, educational, and commercial buildings (a majority of which remain) and many private residences. Layton powerfully influenced the buildings of early statehood Oklahoma. His works are recognized for their endurance and for setting a standard of stability and rich design that continues to enhance the built environment.

On the University of Oklahoma main campus at Norman, Layton fashioned original sections of the library, the administration building, and the football stadium, all still in use. The Layton firm designed the original College of Medicine and Children's Hospital at the University of Oklahoma Health Sciences Center in Oklahoma City. Both were still used in the early twentieth-first century. The Oklahoma State Capitol (designed with S. Wemyss Smith and built from 1914 to 1917) is a neoclassical structure with four-story-tall Corinthian columns on all sides. The interior was altered to gain space in the 1930s to the 1950s but has since undergone a historical restoration. Oklahoma City Central High, Oklahoma's first four-year high school, built in 1908–9, illustrates the adaptability of Layton's works. Abandoned as a sprawling innercity school in the 1970s, it was remodeled as Southwestern Bell Telephone headquarters. The 1936 Oklahoma County Courthouse in downtown Oklahoma City is a monument of Depression-era Art Deco. The Skirvin Hotel (1911) is famous for its oilman founder, William Balser Skirvin, and his daughter, Perle Mesta, Washington DC social leader and minister to Luxembourg from 1949 to 1953. The Skirvin sheltered royalty, U.S. presidents, and early cattle and oil barons. The 1910 Baum Building, one of Oklahoma City's first highrises, was patterned after the doge's palace in Venice. Along with Layton's elaborately ornamented Patterson Building and Halliburton Department Store, the Baum Building fell victim to urban renewal.

The neoclassical Shrine Auditorium (1925. 26), later remodeled as the Journal Record Office Building, Central High (Southwestern Bell), and the original Oklahoma Publishing Company headquarters are three Layton works on the National Register to survive the April 19, 1995, terrorist bombing of the A. P. Murrah Federal Building in downtown Oklahoma City. The Shrine Auditorium and the publishing building suffered extensive damage; Central High sustained less damage. Yet all three remained structurally sound in the late 1990s. Central High and the publishing buildings have since been restored, and the Shrine Auditorium is being incorporated into the bombing memorial as an interpretive museum, with full restoration scheduled.