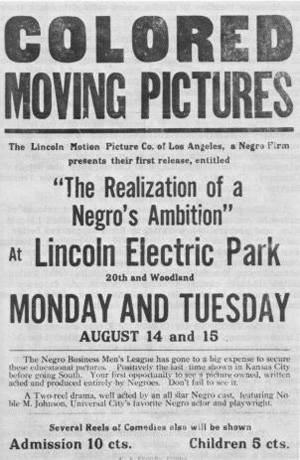 Noble M. Johnson, the first major African American movie actor, was born in Colorado Springs on April 18, 1881. His father was a successful racehorse owner and trainer. Johnson attended public schools in Colorado Springs (Lon Chaney Sr. was a classmate) until the age of fifteen, when he struck out across the country, following the racing circuit, training horses, and working as a cowboy. Back in Colorado Springs in 1909, he filled in for an injured actor, playing an Indian, in a Lubin Film Manufacturing Company Western, and his career path was set.

Johnson made several films for Lubin before joining with several other African Americans (including his brother George) to organize the Lincoln Motion Picture Company in 1916. Noble was the company's original president and acted in its first three films. But he was also getting roles in Universal Studios's serials and was pressured by that studio to resign from Lincoln in 1918. From that point on, Noble Johnson was a Hollywood actor.

Light-skinned and athletic, Johnson was cast in a great variety of often-major roles. He appeared in Four Horsemen of the Apocalypse (1921), The Navigator (1924), Ben Hur (1925), King Kong (1933), and She Wore a Yellow Ribbon (1949). In a business characterized by racial discrimination, Johnson played Native Americans, Latinos, Asians, and other "exotics" but was never billed as African American or identified with African American roles. He died in 1957, and his memory has faded, despite the success and longevity of his career.