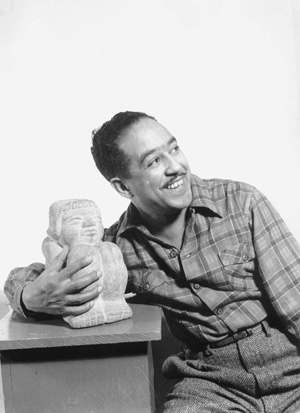 Born in Joplin, Missouri, on February 1, 1902, Langston Hughes was raised primarily in Lawrence, Kansas, by his part-Indian maternal grandmother, who instilled in him a love of stories and of his people, and who often covered him at night with the bullet-torn cape of her first husband, who died in John Brown's raid at Harper's Ferry. A world traveler, Hughes was a key figure in the Harlem Renaissance of the 1920s–and one of the few to continue to actively publish and lecture after that movement ended–and is considered a major modern American writer.

Versatile and prolific, Hughes forged and maintained an international reputation for nearly half a century. A poet, novelist, playwright, essayist, short-story writer, autobiographer, columnist, editor, translator, and author of children's books, Hughes published more than fifty volumes of prose and poetry during his lifetime, beginning at age nineteen with the often-anthologized poem "The Negro Speaks of Rivers" (1921).

Distinguished by his innovative adaptations of jazz and blues musical forms in his poetry– and by his love for the common black folk who are its subject–Hughes is also well known for his fictional creation Jesse B. Semple, or Simple. Through this endearing "everyman" figure, Hughes explored seriously, yet with characteristic humor, some of the most important questions of his day.

Although sometimes criticized for his art, which in his early years was denounced by some critics for its portrayal of "unsophisticated" lower-class black urban life, and later for his politics, which are considered by many to be naive, Hughes encouraged a number of younger African American writers, including Alice Walker, and continues to hold a prominent place in American literature. He died in New York City on May 22, 1967.