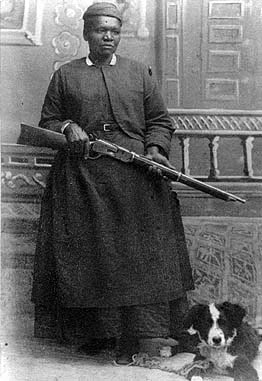 Mary Fields was one of the most colorful characters in the history of the Great Plains. Various descriptions of her claim that she was six feet tall, weighed over 200 pounds, smoked homemade cigars, and carried a pair of six-shooters and a ten-gauge shotgun. She never married or had children. She gained widespread fame, and the nickname "Stage Coach Mary," for deftly maneuvering U.S. mail stagecoaches and freight wagons over daunting mountain trails.

Born into slavery around 1832 in Tennessee, Mary Fields gave meaning to her freedom at the earliest opportunity by migrating to Toledo, Ohio, where she worked for the Ursuline Convent. In 1884 Mother Amadeus of the Ursuline Convent founded the St. Peter's Catholic Mission School in Montana. Three years later Mary Fields joined her there. For the next ten years she provided protection for the nuns and the school and drove a supply wagon hauling essential freight and other goods. Mary chopped wood, did rudimentary carpentry, and whatever else was necessary to ensure the smooth functioning of the nuns' enterprise.

Mary Fields's temper was as legendary as her ability to get hard jobs done. Indeed, one altercation almost proved her undoing. Bishop Filbus N. E. Berwanger fired Mary from her position with the nuns following a shootout with a cowpuncher that left her unharmed and the cowpuncher slightly wounded and greatly embarrassed. Mary never allowed social conventions or expectations of feminine behavior to circumscribe her. Rather, she carved a space for herself that allowed her the freedom to exploit both her penchant for hard work and her desire to help others.

She settled in a town in Cascade County, Montana, where she was the only black resident. With some money from the nuns, she opened a café and became an avid supporter of the local baseball team. The restaurant failed because Mary fed too many who could not pay, and besides, her cooking was unremarkable. Mary took the closing of her restaurant in stride, and for a brief time she subsisted by doing laundry. She never made enough to be considered rich, but she was reasonably content. Her zest for life enthralled the local community. When her laundry burned down the townsfolk pitched in and helped her rebuild it. The owner of the Cascade Hotel and the local saloons all allowed Mary Fields ready access to their facilities, privileges denied to women in general.

In 1895 Mary secured a job delivering mail for the U.S. postal services, and she continued to do so into her seventies. Citizens marveled at her fierce determination to deliver, on schedule, letters and parcels without concern for weather, the ruggedness of the mountain trails, or the remoteness of the homes and outposts that relied on dependable means of communication in order to process land claims. Without doubt, her work facilitated central Montana's development. Mary Fields died in 1914 of liver failure. Neighbors buried her in the Hillside Cemetery in Cascade. A simple wooden cross marks her grave.