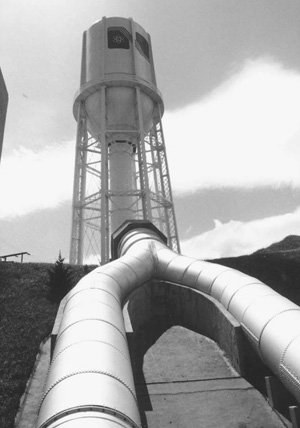 A water tower, or elevated tank, is designed to hold enough water to provide a supply area with sufficient amounts for periods of peak use and, in the case of a system failure, one day's use. A water tower, however, is so much more than a reservoir for water. Along highways, they mark the location and declare the name of countless small and large communities. They also provide an opportunity for ardent fans of high school sports, young lovers, and graduating seniors to declare themselves in height-defying graffiti. The need for water and the need to express pride in hometowns and relationships have made the water tower an enduring feature of the Great Plains landscape.

Water towers are generally constructed from steel. Many were produced by companies known to residents of Plains states from bridge nameplates. A wide variety of shapes are used including those referred to as doorknobs, lattice towers, and fully enclosed domes. Many smaller communities used a shape that one author, Anne Dingus, has likened to the head of the Tinman in the classic movie, The Wizard of Oz. After the tank is erected, the steel is given a protective coat of paint. The name of the town and sometimes a logo is then painted on the tank. Repainting is performed to maintain the condition of the tank as well as to cover graffiti. Water towers can seem deceptively small in appearance because of their height. However, they can hold anywhere from 15,000 gallons to as much as 3 million gallons of water.

The operation of a water tower is fairly simple. Because it needs to be elevated above the rest of a water system, it is constructed on a scaffold or, in the case of a tank, positioned on a hill. The height–usually between 100 and 300 feet–of a water tower is necessary in order to provide pressure. Water is pumped from a treatment plant or a well into a city's water system and also into the tower. Because the water tower is providing storage, the system's pump can be sized to supply average rather than peak demand. During any period, if the city's system needs more water, water is allowed to flow from the tank and increase the supply through the pipes. If demand decreases, the water flows into the tank and is then stored until it is needed.

Because of the simplicity of their design, water towers have survived since the first half of the twentieth century. Towers are familiar and well-remembered landmarks to former and current residents of communities. They stand as sentinels over stable and growing communities as well as over towns that have been bypassed by highways and economic development. The real importance of a water supply and the symbolic importance of the water tower ensure that the it will continue to be an elemental part of the Plains landscape.