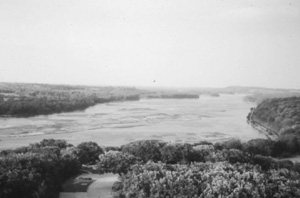 Characteristics of rivers in the Great Plains reflect the climatic transition from arid environments in the lee of the Rocky Mountains eastward to subhumid and humid tallgrass prairies. There is much less runoff to the rivers in the western than in the eastern Great Plains; for example, yearly runoff averages 0.2 inch in eastern Colorado compared to eight inches in eastern Kansas.

About one-half of the major Plains rivers begin in the Rocky Mountains at altitudes of 8,000 to 11,000 feet and receive substantial flows from mountain snowmelt. After entering the Great Plains, most of those rivers contribute some of their flows to extensive irrigation projects. Rivers originating in the Plains generally have less flow available in their western reaches, where water for irrigation is most needed. The characteristics of the major rivers are summarized below from north to south in the Great Plains.

Kis-is-ska-tche-wan, which means "swift flowing," was the Cree Indian name for the North and South Saskatchewan Rivers. Rapid flow and flood conditions are most extreme in June or July of years when snowmelt in the mountains coincides with major rainstorms in the foothills. Dominating water resources development in Saskatchewan is Lake Diefenbaker, which was created by Gardiner Dam on the South Saskatchewan and serves a variety of purposes, including electricity generation, irrigation, and recreation.

The Assiniboine River receives flow from large tributaries, including the Qu'Appelle and Souris Rivers, before joining the Red River of the North. A connection with the South Saskatchewan has existed since the late 1960s when the water level of Lake Diefenbaker has been high enough for water to be released to the Qu'Appelle River.

From its origin in western Montana to its confluence with the Mississippi River, the Missouri is the longest river in the United States and has the second largest drainage area. Early writers described the Missouri as a muddy and a hungry river, constantly eating at its banks. A strong current would tear away an entire strip of forest, blocking the river with tree trunks that hindered navigation. Control works have since reduced these characteristics, but landowners along the banks where the river is not impounded still become apprehensive every time the river rises. The Missouri provides water supplies for Great Falls, Montana, Omaha, Nebraska, and St. Joseph and Kansas City, Missouri. It also provides irrigation water and hydroelectric power from six reservoirs on the main stem upstream from Sioux City, Iowa. The reservoirs in North and South Dakota extend so far along the river that less than a quarter of the river's length in those states has not been inundated.

Snowdrifts on the side of Yount's Peak, near Yellowstone National Park, melt to produce streams that combine into the Yellowstone River, which has the upstream half of its drainage area outside the Great Plains. After making a journey of more than 671 miles and providing water supply for the city of Billings, the Yellowstone joins the Missouri at the Montana–North Dakota boundary.

Although tributaries of the North and South Platte Rivers are less than ten miles apart in northern Colorado, the course of the rivers diverges through Wyoming and Colorado until they finally flow near each other in Nebraska and join at the city of North Platte. The Platte River then flows eastward 310 miles across Nebraska to join the Missouri River at Plattsmouth. The Platte and its largest branches provide irrigation water for vast acreages of crops. The South Platte and tributaries provide part of Denver's water supply. Between Lincoln and Omaha, the Platte provides Lincoln's water supply and part of Omaha's supply by contributing induced recharge to wells in the adjoining alluvium.

The Kansas River has the fifteenth largest drainage area in the United States; however, the river bearing that name has a length of only 185 miles. Topeka, Lawrence, and much of Johnson County, including the densely populated suburbs of Kansas City, obtain water supplies from the Kansas River.

The Arkansas River is the sixth longest in the United States and has the ninth largest drainage area. It supplies water for Pueblo, Aurora, and Colorado Springs, and for extensive irrigation. In western Kansas during much of the year it is nearly dry. In eastern Oklahoma, the Arkansas receives the Canadian River, which, with tributaries, provides about half of the water supply for Oklahoma City.

The headwaters of the Red River are in the New Mexico part of the level, arid Llano Estacado. Eastward, the Red River forms much of the Oklahoma-Texas boundary, and tributaries provide the Wichita Falls water supply. Similarly the Brazos and Colorado Rivers begin on the Llano Estacado, supplying Waco and Austin near the eastern edge of the Great Plains.

Developments on several rivers have resulted in both benefits and unwelcome changes. Well-documented changes include degradation of riverbeds downstream from dams and large reductions in channel width of some rivers.