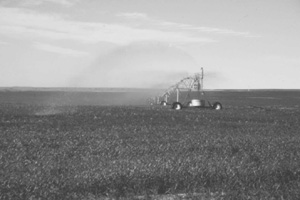 In response to moisture deficiency, farmers irrigate more than 20 million acres in the Great Plains. Plains irrigation gives water stability to agriculture, permits a wider diversity of crops than possible with rain-fed cultivation, and promotes economic growth through increased productivity and associated processing and livestock feeding activities. Irrigation is most commonly used in the western reaches of the region, where it is drier and there is available groundwater and rivers sustained by Rocky Mountain meltwaters.

Small-scale irrigation in the nineteenth century involved diverting water onto fields or using windmills to pump water from shallow aquifers. By 1900 community and corporate ditch irrigation enterprises were expanding on the Platte and Arkansas Rivers, and, through the efforts of Mormon settlers and railroads, along various rivers in southern Alberta. Windmills were commonly used to pump water for people, stock, and gardens from Texas north to the Dakotas and Manitoba. A huge windmill near Garden City, Kansas, provided enough water to irrigate fifteen acres.

In the American Great Plains large-scale irrigation began with the Reclamation Act of 1902 that authorized the secretary of the interior to construct reservoirs, diversion dams, and distribution canals in the West, including the Plains states. Subsequently, pump technologies of the 1930s made it possible to lift water from the Ogallala and other formations of the High Plains Aquifer. In the Prairie Provinces, the federal government of Canada and provincial government of Alberta passed legislation supporting irrigation. The Alberta Irrigation District Act of 1915 enabled farmers to organize into districts that could raise capital to finance construction of dams, canals, and other irrigation works.

The Canadian irrigation districts and American reclamation projects provide water to farmers through a system of dams on rivers, on- and off-stream storage reservoirs, diversion canals, and smaller ditches that lead directly to fields. Gravity flow is most common, but in some newer districts in Saskatchewan and rehabilitated facilities elsewhere, water is provided under pressure. Farmers receive a specified amount of water at a set price, with the district or project maintaining the diversion, storage, and distribution system. Farmers from Nebraska south to Texas pump groundwater directly from the Ogallala Aquifer. Each farmer holds the right to use a given amount of water, measured in acre-feet (the volume of water needed to cover one acre to a depth of one foot). Allocations usually range between two and three acre-feet a year. The depth to the aquifer varies greatly, but a majority of irrigators pump their water from between 100 and 200 feet. Electricity, diesel fuel, or natural gas power most of the pump engines. Alternative sources of water for irrigation, such as eƒ¢uent from livestock operations or urban areas, provide water in limited areas.

Most Plains farmers apply water to their fields using either surface or sprinkler methods. The main form of surface irrigation is furrow, whereby furrows are plowed between crop rows along which water flows from a pipe with holes called gates. Furrow irrigation is employed when the land is relatively flat and the soils absorb water slowly. The leading form of sprinkler irrigation is the center pivot. It is a lateral pipe–with spray nozzles, often suspended on drop tubes and mounted on wheeled structures called towers–that is anchored at the center of the field and automatically rotates in a circle. A typical center pivot has a one-quarter-mile radius and waters approximately 130 acres. More or less ground can be irrigated by adding or subtracting pipeline and towers. Center-pivot systems require more capital investment than furrows, but they take less labor to operate and can water uneven terrain and fast absorbing soils.

Irrigation is most developed in areas of good soils where the saturated thickness is greatest or where irrigation districts and reclamation projects have diverted river flow. In 1998 Nebraska led the Plains states with more than 6.3 million irrigated acres, followed by Texas with more than 4.4 million irrigated acres in the Plains part of the state. Next in importance were Kansas (2.7 million acres), Colorado (1.7 million acres in the Plains), and Alberta (1.5 million acres). Montana, Oklahoma, New Mexico, South Dakota, Saskatchewan, Wyoming, and North Dakota each had between 180,000 and 800,000 irrigated acres; Manitoba irrigated some 32,000 acres. Most of the irrigated land in Nebraska, Texas, and Kansas relies on water from the High Plains Aquifer system. At the beginning of the twenty-first century irrigated acreage continued to increase in nearly all areas.

A wide array of crops is irrigated in the Great Plains. Corn occupies about two-fifths of the irrigated land. Nebraska irrigates more than 4.7 million acres of corn and Kansas nearly 1.2 million acres. Hay, grown throughout the region, accounts for nearly 12 percent of the acres irrigated. It is relatively most important in Wyoming and Montana, where irrigated pasture is also significant. Irrigated wheat is most important in Oklahoma, Kansas, Alberta, and Texas. Grain sorghum is irrigated on about 1.4 million acres, nearly twothirds of which is in Texas, where feedgrains are replacing once-dominant cotton. The irrigated area for all these crops is expanding, as it is also for soybeans, sugar beets, and potatoes.

The sustainability of irrigation in the Great Plains is threatened by soil salinization and by groundwater depletion. Most irrigationinduced soil salinity results from water losses in transport, where seepage from canals raises the water level and brings natural salinity nearer to the surface and within the root zone of crops. Lining irrigation canals and ditches reduces the problem, but it can be very expensive. In Alberta much of the 4,500 miles of canals in the conveyance system has been rehabilitated in this way. Poor on-farm management of irrigation water also can cause salinity, especially in low-lying areas where water ponds and soil become salinized after evaporation. Soils with saliency programs can be reclaimed if the water table is brought below the root zone and the excess salts are leached out of the soil. The depletion of the High Plains Aquifer concerns farmers, as saturated thickness (the vertical extent of the watered zone in the aquifer) is limited in many areas, especially in Texas and New Mexico, and recharge is minimal. In some areas there is not enough water remaining to support irrigation. The distance to the water increases as irrigation lowers the water table, and lifting water becomes too costly when energy prices are high. There also is concern for groundwater quality when agricultural chemicals reach an aquifer.

In response to groundwater depletion, the desire to increase irrigation, and competing demands for water, irrigation efficiency has become a priority for most Plains irrigators. Water-saving practices have been widely adopted by farmers. Furrow irrigation has become less water-consumptive through the use of surge flow, whereby water is intermittently released from the gated pipes to discharge in surges that achieve relatively even watering along the entire length of a row. Center-pivot sprinklers are being fitted with low-energy precision application (LEPA) systems that use low-pressure emitters on drop tubes to apply the water directly on or near the soil. Drip irrigation, wherein water drips or trickles from perforations in a low-pressure pipe placed alongside the base of a row of plants, and subsurface drip irrigation, with the water carried directly to the root of the plants, have moved from experimentation to actual field use. Most farmers employ some form of irrigation scheduling to apply only the water required by a crop under different evaporative conditions. Water-saving innovations extend the available water supplies to assure the continuance of irrigation in the Great Plains.