WASHITA, BATTLE OF THE 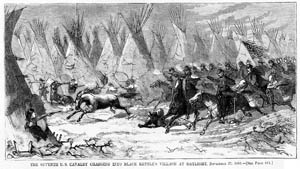 The Battle of the Washita occurred on November 17, 1868, in western Indian Territory, about one mile west of present-day Cheyenne, Oklahoma. Before dawn, Lt. Col. George Armstrong Custer peered over a snow-encrusted ridge into the valley of the Washita River. There he saw a large Cheyenne village in a wooded bottom on the south side of the stream. At daybreak, 700 men of the Seventh U.S. Cavalry struck the village of Black Kettle, a Cheyenne peace chief. Completely surprised, the warriors offered only token resistance as women and children fled to the surrounding woodlot and hills. Troopers occupying the village began burning its fifty lodges, killing approximately 800 horses and destroying supplies. Throughout the day, soldiers skirmished with a growing number of warriors from camps downstream who converged on the smoldering village. In late afternoon, Custer assembled his troops and withdrew, with fifty-three captives. Cavalry casualties included twenty-two men killed and thirteen wounded. Also, Indians murdered Clara Blinn, a white captive, and her young son during the attack. Precise Native losses are unknown. Some estimates placed the dead at nine to twenty men, including Black Kettle, and eighteen to forty women and children, while others suggest that as many as 103 were killed in total.

The Battle of the Washita emerged as the only significant engagement of the winter campaign of 1868–69. Frustrated by elusive Cheyenne and Arapaho warriors who raided the Central Plains frontier the previous summer, Gen. Philip H. Sheridan had organized the expedition to chastise the Indians. He also hoped a show of force would coerce the Cheyennes and Arapahos onto a reservation created for them by the 1867 Treaty of Medicine Lodge Creek. Custer's attack on Black Kettle's village, some of whose warriors participated in the summer raids, accomplished both of Sheridan's objectives. In 1997 the battlefield was designated a National Historic Site by the National Park Service.