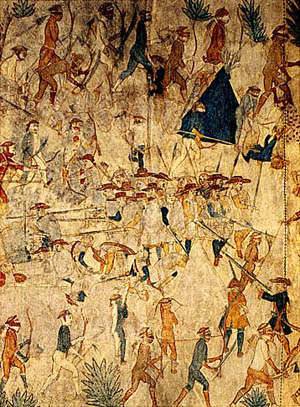 "Villasur and his men (center) were quickly surrounded by the Pawnee and killed. 1720"

In 1720 the Spanish governor of New Mexico, Antonio Valverde y Cosío, under orders from the viceroy in Mexico City, sent out an expedition to investigate rumors of a French thrust toward New Mexico. The force of forty-two soldiers, sixty Pueblo Indian auxiliaries, and three settlers was led by Lt. Gov. Don Pedro de Villasur. Fray Juan Mínguez went as chaplain. There was also a French interpreter, "Juan de Archebeque" (Jean L'Archevêque), a survivor of the La Salle expedition that had landed on the Texas coast in 1685.

Having left Santa Fe in mid-June 1720, the Villasur expedition encamped in early August on a large river that most authorities identify as the Platte, not far from a sizable Pawnee village. An exchange of messages with the Pawnees proved unsatisfactory, and Villasur, suspecting treachery, prepared to withdraw. On the morning of August 14, while the Spaniards were gathering their horses, they were attacked with musket fire by the Pawnees and Otoes. Taken by surprise, the Spanish camp was thrown into confusion. Only thirteen of the soldiers escaped. Villasur himself perished along with forty-five others, including Mínguez and L'Archevêque. The Villasur catastrophe severely weakened New Mexico's defenses, for the province had lost a third of its fighting force.