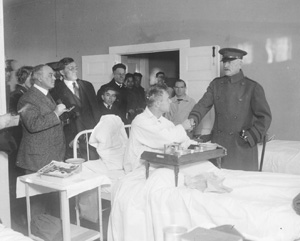 Spanning America's emergence as a world power, John Joseph Pershing's military career began in the Great Plains as a junior cavalry officer in 1886 and concluded as army chief of staff in 1924. Born September 13, 1860, in Laclede, Missouri, Pershing graduated from the U.S. Military Academy at West Point in 1886. Following duty in South Dakota and in the Southwest, he served as military science professor at the University of Nebraska from 1891 to 1895, founding the drill team now famed as the Pershing Rifles. He taught Willa Cather and included Roscoe Pound and William Jennings Bryan among his friends. He married Frances Warren, daughter of Wyoming senator Francis Warren, in 1905.

The Spanish-American and Philippine-American Wars proved Pershing's first career break, when he came to future president Theodore Roosevelt's attention in Cuba and then performed well in the Philippine Islands. Promoted over 862 senior officers to brigadier general in 1906, Pershing gained national prominence in 1916 with command of the punitive expedition against Mexican revolutionary Pancho Villa. Meanwhile, on August 27, 1915, Pershing lost his wife and three of his four children in a fire at their house at San Francisco's Presidio.

Pershing moved onto the international stage after President Woodrow Wilson selected him to command the American Expeditionary Force when the United States entered World War I in April 1917. Despite its late entrance into the war, the army played a vital role, assisting in blunting Germany's offensives in March and July of 1918, then successfully attacking the Saint Mihiel salient and in the Meuse-Argonne sector as the war ended.

Promoted to general of the armies on September 3, 1919, Pershing ended his career in 1924 as chief of staã. He retired to chair the American Battle Monuments Commission and perform ceremonial duties. On September 2, 1946, he secretly married Michiline Resco. Pershing died in Washington DC on July 15, 1948.