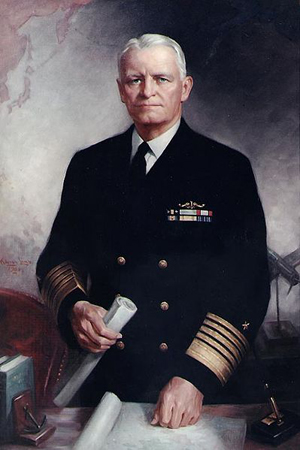 Chester William Nimitz was born in Fredericksburg, Texas, on February 24, 1885, to Chester Bernard, a cattle driver, and Anna (Henke) Nimitz. Chester's father died before he was born. He was raised by his mother and his paternal grandfather, Charles H. Nimitz. The grandfather, a German immigrant and lover of the sea, built a steamboat-shaped hotel in Fredericksburg, the Nimitz Hotel, that still existed at the beginning of the twenty-first century. Young Chester listened with wide eyes to stories of his grandfather's youth in the German merchant marines.

Nimitz graduated from the U.S. Naval Academy in Annapolis, Maryland, on January 30, 1905, seventh in a class of 114. For thirty-five years Nimitz performed his duties in the U.S. Navy, rising to the rank of admiral. On December 17, 1941, ten days after the bombing of Pearl Harbor, Nimitz was appointed commander in chief of the Pacific Fleet. Admiral Nimitz quickly rebuilt the fleet into the largest military armada ever assembled and launched an offensive, with raids on Wake Island, the Gilbert Islands, the Marshall Islands, and New Guinea. He handed the Japanese their first major setback at Midway Island in June 1942 and continued the offensive in the Pacific until the Japanese defeat. Along with Gen. Douglas MacArthur, Nimitz signed the Japanese surrender agreements.

Chester Nimitz was the first naval officer to acquire five stars. In response to Nimitz's generosity in returning to the Japanese their samurai swords, the Japanese government built a Garden of Peace behind the Nimitz Hotel in Fredericksburg as a tribute to his goodwill. Nimitz died on February 20, 1966, near San Francisco and was buried in Golden Gate National Cemetery.