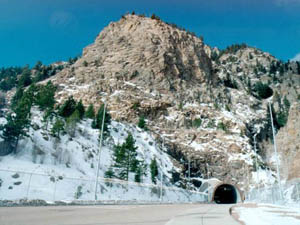 In a hollowed-out mountain in the Colorado Rockies, overlooking the Great Plains, is the command center that would sound the first alarm of ballistic missile or air attacks against North America. The North American Aerospace Defense Command (NORAD), hidden in Cheyenne Mountain Air Force Station, near Colorado Springs, Colorado, keeps watch on aircraft, missiles, and space systems posing a threat to the United States and Canada. Cheyenne Mountain is the hub of a communications system that uses satellites, microwave, and fiber-optic links, carrying information from computers around the world to the NORAD commander in chief and his advisers in the command center. There, they constantly assess the aerospace situation on computer screens that display missile warning and aerospace surveillance information.

Built between 1961 and 1966, at a total cost of $142.4 million, the construction required more than one million pounds of explosives and removed more than 693,000 tons of granite. The main excavation consists of three chambers, each 45 feet wide, 60 feet high, and 588 feet long. Seven thousand tons of steel were used for the fifteen two- and three-story buildings inside the mountain. The facility has built-in utilities and services to make it fully self-sufficient for up to thirty days in case of national emergency. The massive blast doors, each more than three feet thick and with a swing weight of thirty tons, can be closed in forty-five seconds. Approximately 200 men and women from the army, navy, marines, air force, and Canadian forces staff the operations centers at Cheyenne Mountain. About 20,000 tourists visit each year.