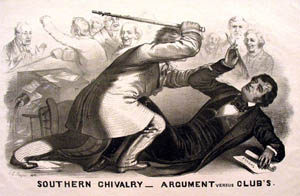 Bleeding Kansas is the term used to describe the violence that flared in Kansas Territory from 1855 to 1856 (and continued on a smaller scale until 1861). Behind this lay the nation's territorial expansion, beginning with the Louisiana Purchase in 1803, of which Kansas formed a part. Westward migration into the Mississippi Valley, steam-powered transportation, the prospect of a transcontinental railroad through the central United States, an unending land hunger, and acquisition of further western territory from 1845 to 1848 all spurred settlement of the midwestern prairies and sharpened the sectional rivalry between slave and free states.

In 1854, by the Kansas-Nebraska Act, Congress repealed a prohibition on extending slavery in the Louisiana Territory north of 36º30'. The outcome was tumultuous, inaugurated by angry debates in Congress and the press. There followed the birth of the Republican Party, dedicated to the nonextension of slavery, the demise of the nationalist Whig Party, and sectional division of the Democratic Party, sponsor of the law.

The Kansas-Nebraska Act authorized formation of a territorial government in Kansas, lying directly west of slaveholding Missouri. Missourians, concentrated in the slave-owning, hemp-growing northwestern corner, feared that formation of a free territory would jeopardize their interests. Violence, fraud, murder, rivalry for land, and a supine federal response created the "Kansas Question," which dominated national politics from 1854 to 1858. In 1855 some 5,000 Missourians helped elect a proslavery legislature. Gov. Andrew Reeder declined to repudiate the fraud and allowed the legislature to establish a proslavery government. Antislavery groups drafted a "free-state" constitution, held elections, and established an antislavery government. Two territorial governments now existed, one fraudulent but recognized by President Franklin Pierce, the other extralegal and rejected by him. Tension erupted into violence in November and December 1855 in the "Wakarusa War," participated in by 1,500 "border ruffians." Temporarily quelled by the territorial governor, violence little short of civil war again broke out in 1856 when border ru.ans sacked the freestate town of Lawrence. In response, a small band led by the fanatical abolitionist John Brown murdered five proslavery settlers, and guerrilla warfare raged. "Bleeding Kansas" brought death to about 200 persons and destroyed about $2 million in property.

Congress bitterly debated a proslavery constitution, refusing to accept it, though it enjoyed President James Buchanan's support. The national crisis was marked by the nearvictory of the newborn Republican Party in the presidential election of 1856, the Dred Scott decision of the U.S. Supreme Court in 1857, which mandated that Congress could not constitutionally prohibit slavery in the territories, and the Lincoln-Douglas debates in 1858 that dramatically argued the territorial question.

Congress referred the proslavery constitution to Kansans, resulting in a resounding rejection tied to a stipulation that rejection entailed postponement of statehood. By the time of the vote–August 2, 1858–migration of free-state settlers had decided the issue. Contrary to myth, neither antislavery New Englanders nor Deep South settlers affected the result. The peopling of Kansas followed a more normal migrational pattern. The census of 1860 showed that all slave states had contributed 27,440 persons; three free Ohio Valley states– Ohio, Indiana, Illinois–alone sent 30,929 settlers of a total population of 107,204. The census ironically disclosed that only two blacks lived in Kansas Territory; the next year Kansas entered the Union a free state. But the issue of federal authority over slavery in the territories endured, splitting the nation in 1861.

James A. Rawley University of Nebraska-Lincoln

Rawley, James A. Race and Politics: "Bleeding Kansas" and the Coming of the Civil War. Philadelphia: Lippincott, 1969.