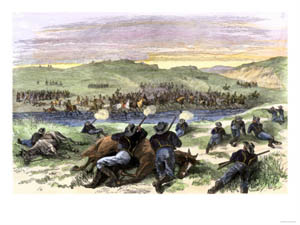 Poster of image depicting the Battle of Beecher Island in 1868

The Battle of Beecher Island was one of the most publicized engagements fought between Plains Indians and the U.S. Army. On September 17, 1868, on a sandbar in the middle of the Arickaree River in eastern Colorado, a large group of Cheyenne Dog Soldiers, Arapahos, and Lakotas attacked fifty citizen scouts under the command of Maj. George A. Forsyth. The scouts held off repeated charges before the Indians departed.

The scouts survived by eating the meat of their horses for nine days before reinforcements arrived from Fort Wallace, Kansas. Forsyth's command sustained losses of five scouts killed and eighteen wounded. Included among the dead was Lt. Frederick H. Beecher, the nephew of the outspoken New York abolitionist Henry Ward Beecher. Forsyth named the battle in memory of Lieutenant Beecher.

The Indian records obtained years later by George Bent and George B. Grinnell accounted for nine warriors killed and an unknown number wounded. One casualty was the esteemed warrior Roman Nose, a Northern Cheyenne member of the Crooked Lance Society. The Cheyennes referred to the battle as "the fight where Roman Nose was killed." Although the battle held little significance for the Indians, the scouts' successful defensive stand against extreme odds was inevitably compared to the Battle of the Little Bighorn, and consequently came to hold epic and symbolic importance for Americans. The sensationalism it generated indirectly led to an infusion of new troops into the Plains, culminating in the Washita campaign.