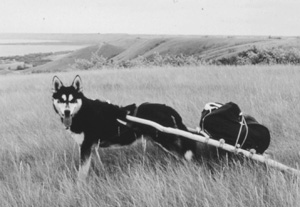 Unique to the Plains, the travois is a wooden load-bearing frame fastened by a leather harness to a dog or horse. The basic dog travois consists of two aspen or cottonwood poles lashed together at one end with buffalo sinew. The other ends rest splayed apart. Crossbars are lashed between the poles near the splayed ends. The finished frame looks like a large letter A with extra crossbars. The apex of the A, wrapped in buffalo skin to prevent friction burns, rests on a dog's shoulders, while the splayed ends drag over the ground.

Used by Plains Indian nations, travois were perfectly suited to their environment. Over native grasslands the dragging travois ends sweep silently and nearly without friction; they appear almost to float through the same prairie that cracks and breaks wheel axles. Outside of grasslands the travois is not much use, for bush and gullies are impassable.

Native women both built the travois and managed the dogs, sometimes using toy travois to train puppies. Bison meat and firewood were typical travois loads. Dogs could tack up and down grassy hill slopes and ford shallow rivers with a travois. But temperature was a serious constraint on travois work, for on warm days dogs overheated easily.

In historic times Plains Indians constructed much larger versions of the dog travois and hitched them to horses. Horse travois allowed the transport of the increased material wealth accumulated by some Native nations skilled in the mounted bison hunt. Children or ill adults could ride on the horse travois load rack as well. Their rack ride was smooth, but the legs of the saddle-rider, typically female, hung uncomfortably over the travois poles.