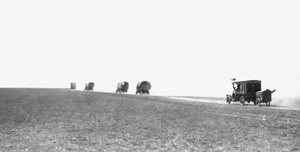 In August 1919 thousands of people in Nebraska and Wyoming greeted U.S. army soldiers with curiosity, patriotic cheer, and generous amounts of food and drink as they drove a convoy of early heavy trucks across the Great Plains.

Among the caravan's nearly 300 soldiers was twenty-eight-year-old Lt. Col. Dwight D. Eisenhower, who became the supreme allied commander during World War II and, in 1952, the thirty-fourth president. President Eisenhower initiated the Federal Highway Trust Fund, which built the nation's 46,000-mile interstate highway system, and he would later credit the convoy experience for teaching him that a quality paved-road system is essential to a nation's economic and military security.

Officially named the Transcontinental Motor Convoy of 1919, the caravan was composed of eighty-one army vehicles and numerous nonmilitary autos and trucks. Its main objective was to determine the military value of assorted vehicles the army had acquired but not put into service during World War I. The convoy also served as a war game, a recruiting drive, a campaign for long-haul trucking, and, not incidentally, a parade observed by millions along its route.

For more than sixty-two bone-jarring days the truck train traveled 3,251 miles from Washington dc to San Francisco on the Lincoln Highway, which later became U.S. Route 30. In 1919 the Lincoln Highway through Nebraska and Wyoming was mostly a rough dirt road, often little more than a deeply rutted trail with weak or nonexistent bridges. The convoy needed twenty days to forge its way through the two Plains states. West of North Platte, Nebraska, the soldiers and machines became mired in a 200-foot stretch of quicksand for more than seven hours.

Overcoming the obstacles of rudimentary vehicles and rugged road conditions with hard work and persistence, the convoy reached San Francisco on September 6 with 90 percent of the vehicles that started still running. Beyond its military value, the convoy helped make the case to the nation that improving crosscountry roads was a federal, not just a local, priority–a point Eisenhower would make as president.