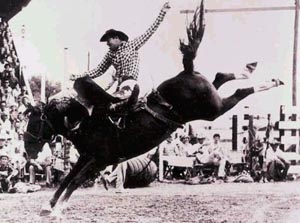 The Great Plains is the home of the open range cattle kingdom, Wild West shows, and an enduring ranching industry, so it is not surprising that the region has produced some of the greatest rodeo champions ever. One of these was Casey Tibbs. Tibbs was born at Mission Ridge, South Dakota, on March 5, 1929, and grew up as a traditional ranch hand, working horses out of his family's log house at the mouth of the Cheyenne River. When he began hitching-to contests in the 1940s, the slightly built Tibbs’s uncanny "rhythm riding" drew the derision of older, more powerful riders. They could not argue with his success, however, and by decade's end Tibbs was the youngest world champion in history. As his collection of tack and buckles grew in the 1950s, Tibbs became a darling of the postwar decade alongside major-league baseball stars. His striking good looks, purple luxury sedans, and silk shirts became legendary both in and out of rodeo circles.

By the time of his retirement in 1959, Tibbs had won eighteen world championships (nine Professional Rodeo Cowboys Association and nine International Rodeo Association). His list of championships was matched only by his flamboyant personality. Tibbs had a knack for capturing and in some cases creating the limelight. In 1951 Life magazine featured the photogenic South Dakota cowboy on its cover, the only cowboy ever to earn that distinction, and set the stage for Tibbs's post-rodeo careers in acting and overseas Wild West shows. Tibbs died on January 28, 1990, in Ramona, California.