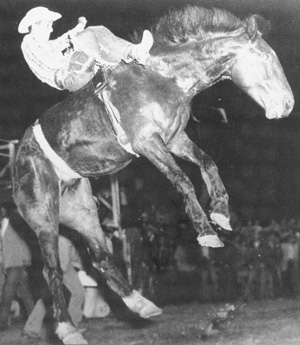 Perhaps the finest rough stock contestant ever to compete in professional rodeo, Jim Shoulders was born on May 13, 1928, in Tulsa, Oklahoma. Familiar with ranch stock from childhood, he entered his first rodeo competition in 1943 at Oiltown, Oklahoma, winning the evidently inspiring sum of $1,800.

A professional in business as well as sport, Jim Shoulders has done much to promote the future of rodeo. In addition to media promotion as a member of the Miller Lite All-Stars, he has worked in the rodeo production business and maintained fine contract bucking stock, including the famed "weather" bulls Cyclone, Hurricane, Twister, and Tornado, who was ridden only once in six seasons. Shoulders also opened the first rough stock training school (1961–89) for aspiring rodeo contestants at his ranch in Henryetta, Oklahoma.