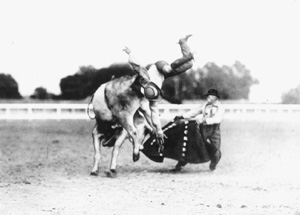 Homer Holcomb waves a cape at a Brahma bull, while another clown is thrown at the Colorado State Fair Rodeo in Pueblo, Colorado, between 1920 and 1930.

Rodeo is distinctive, if not unique, among major American spectator and participant sports because it is based on the working skills of a real occupation, even though the roping and riding that take place in a rodeo arena are far more refined than those that occur during the daily work of a ranch. The origins of rodeo lie in the impromptu competitions that naturally arise among men working cattle from the backs of horses–dares to ride an especially cantankerous bucking horse, bets at a calf branding on who can heel more calves without missing, challenges to be first to rope a herd-quitting steer.

The precursors of modern rodeo can be found in the horse sports and races and the riding and roping exhibitions that occurred at the fiestas of Spanish missions in Mexico and California in the late eighteenth and early nineteenth centuries. In the United States rodeo-like activities coincided with the big cattle drives that followed the Civil War–a broncriding contest between trail-driving crews near Deer Trail, Colorado; steer-roping contests at Pecos, Texas, and Dodge City, Kansas; tryouts for Buffalo Bill Cody's Wild West show at North Platte, Nebraska. The first complete rodeo, in a modern sense, took place at Prescott, Arizona, in 1888, and contestants paid to enter roping and riding contests in which they competed for trophies and cash prizes before an audience of paying spectators. The bestknown American rodeo, Cheyenne Frontier Days, began in 1897. The equally famous Calgary Stampede began in 1912. Many early rodeos were held in pastures, a circle of buggies and automobiles serving as an arena. Bucking horses were held by mounted snubbers while riders saddled them in the open.

Unscrupulous promoters often took advantage of cowboys in the early days of rodeo, but in 1936 a strike by contestants at the big eastern rodeos resulted in the formation of the Cowboys' Turtle Association, the forerunner of today's Professional Rodeo Cowboys Association (based in Colorado Springs). In addition to the hundreds of rodeos sanctioned each year by the association, there are also thousands of so-called amateur rodeos, many of them sanctioned by smaller regional associations. The National Intercollegiate Rodeo Association (which sponsors the national finals at Montana State University in Bozeman), the National High School Rodeo Association (headquartered in Denver), and youth rodeos of various types also sponsor many hundreds of rodeos each year. Rodeo as organized sport also is found in Australia and New Zealand.

Although early-day rodeos often had a dozen or more contest events for both men and women contestants, a contemporary rodeo has seven standard events for men and a cloverleaf barrel race for women. Rodeos generally begin with quasi-patriotic ceremonies that include a grand entry of riders led by the American flag. The first contest event is bareback bronc riding, in which the contestant holds onto the handle of a leather rigging cinched around a horse confined in a narrow bucking chute. To qualify, the rider must spur the horse above the point of the shoulders on the first jump out of the chute, ride for eight seconds, and not touch either himself or the horse with his free hand. Two judges score both the rider and the animal a maximum of 25 points each for a possible total of 100 points. The same rules also apply to saddle bronc riding, during which the contestant rides in a standard saddle whose design has been approved by the Professional Rodeo Cowboys Association holding onto a buck rein attached to a halter. Bull riding, the last of the rough stock events, has similar rules, except that the rider holds onto a flat-plaited loose rope and is not required to spur the animal out of the chute.

Timed contests include calf roping, steer roping, team roping, and steer wrestling, the latter two the only events requiring two competitors. In each of these events the animal, held in a chute, is given a head start, ensured by a barrier rope that, if broken, results in a ten-second penalty. A roper must catch the calf, throw it to the ground, and tie three legs with a shorter rope called a pigging string. The calf must stay tied for six seconds for a qualified time, with the quickest time winning. Single steer roping follows the same rules except that the roper downs the steer by flipping the rope over the steer's hip and tripping him. In team roping the header catches the steer by the horns, the heeler by the two back legs; catching only one leg results in a five-second fine. In steer wrestling, sometimes called bull-dogging, the wrestler comes out of the chute on the left side of the steer, while his helper, called a hazer, comes out on the right to help keep the steer running straight. The dogger must jump off his running horse onto the back of the steer, pull him to a stop, and twist his horns to bring him to the ground with all four legs pointing in the same direction.

Previous to World War II, cowgirls competed among themselves in both roping and riding events and sometimes competed against men in trick-riding and trick-roping events. Today, although women compete in riding and roping events in rodeos sanctioned by the Women's Professional Rodeo Association, most female rodeo competitors are essentially limited to the barrel race, a timed event in which three barrels must be circled in a cloverleaf pattern.

As professional rodeo has become more popular in recent decades, attracting many participants from urban backgrounds, it has also become more removed from its ranching roots. As a result, a backlash in the form of ranch rodeo has arisen, beginning in Texas in the 1980s and spreading from there throughout most of the western states. In contrast to the individual competition of regular rodeo, ranch rodeo features cooperation among a four-member team competing in events such as calf branding, sorting, and wild cow milking that are more closely attuned to actual ranch work. Although not as accessible to the general population, ranch rodeo has nevertheless proven quite successful in bringing rodeo back to its ranch-country roots.