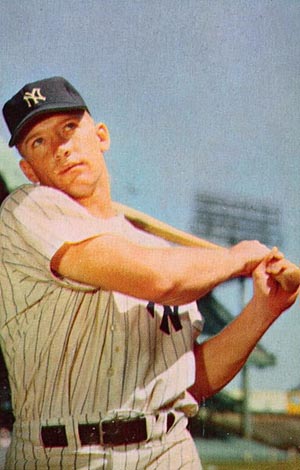 One of the most recognized names in baseball history, Mickey Mantle starred for the New York Yankees in the 1950s and 1960s. Born in Spavinaw, Oklahoma, on October 20, 1931, he later moved with his family to nearby Commerce. Mantle's father, a lead and zinc miner, spent countless hours developing his son's baseball talent. While growing up, Mantle played on numerous local sandlot and youth teams. He graduated from Commerce High School in 1949 and was signed by the Yankees to play for their Class D minor-league team in Independence, Kansas. In 1950 he played in Joplin, Missouri, for a Class C team, and in the off-season he returned to Oklahoma to work with his father in the mines.

After an impressive spring training in 1951, Mantle was promoted by New York to the major leagues. Over the next eighteen seasons the "Commerce Comet" established himself as the greatest switch-hitter in the game's history. Among his numerous achievements, Mantle led the league in home runs four times and won three most valuable player awards and one Triple Crown. Elected to the National Baseball Hall of Fame in his first year of eligibility, he finished his career with a .298 batting average and 536 home runs. Mantle's impressive statistics could have been even better had he not been plagued by numerous injuries. Following his retirement, Mantle's legend grew, and he was still a hero to millions in the 1990s. After decades of heavy drinking, he required a liver transplant in June 1995 and died on August 13 of the same year.