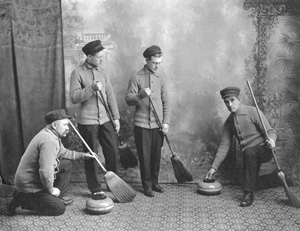 The winter ice sport of curling was introduced to the Great Plains by Scottish immigrants. The minimal equipment needed–ice, brooms, and stones–made it easy for these sportsmen to continue the tradition, especially in the early days when the playing stones weren't always uniform. Curling involves two teams of four players each alternately sliding stones (today, each stone weighs forty-two pounds) along an ice lane toward a target of concentric circles. Points are scored for having more stones closer to the "tee" (the center of the circles).

With long, cold winters and many ponds, lakes, and rivers, the northern parts of the Great Plains are especially suited for curling. In the Canadian provinces of Manitoba, Saskatchewan, and Alberta, the length of the playing season quickly helped curling surpass other sports such as baseball and cricket in popularity. Curling developed as more than a competitive game. During the winter the social fabric of the Prairie communities centered around each town's curling rink.

Just as the railroad's expansion helped establish new settlements in western Canada and the United States, so, too, did it help to spread curling, especially when Scotsmen were part of the railway gangs. Manitoba first recorded curling in 1876, and by 1888 pioneers there had formed the province of Manitoba and Adjoining Territories branch of the Royal Caledonian Curling Club of Scotland. A year later the branch hosted the world's largest bonspiel, or tournament, of the times, with sixty-two rinks (teams) competing in Winnipeg. In 1988 the 100th annual Manitoba Curling Association bonspiel drew a world-record 1,280 rinks.

Curling was played in the territory of Saskatchewan as early as 1880, when tamarack blocks shaped to resemble curling stones were fitted with iron handles and slid across the frozen Saskatchewan River. The dedication of Saskatchewan's curlers is best illustrated by the journey undertaken by a Prince Albert team intent on playing in the 1890 Winnipeg bonspiel. The foursome walked 200 miles, their stones carted by ponies, just to catch a train that required another three days to reach Winnipeg. The roots of curling are still strong in the province today: the Saskatchewan Curling Association is the largest of its kind in the world. At its peak in 1960–61, the association had 578 member clubs. Among the province's best-known curlers was Regina's Richardson family rink, which in 1959 won the first of four national and world championships in five years.

Curling stones were also regularly thrown in Alberta by the 1880s, shortly after the arrival of the railroad. In 1959 Calgary's Big Four Curling Club became the world's largest, boasting forty-eight sheets divided between two levels. Calgary was also the site of the first world championship held outside of Scotland, in 1964, and of the Olympic curling demonstration in 1988.

Curling filtered across the U.S. Great Plains much as it did across Canada but with additional influence from the north. Initial members of the Manitoba Curling Association included clubs in Butte, Montana, and St. Paul, Minnesota. However, the sport has never become as established in the United States as it has in Canada, the "Curling Capital of the World." The three Canadian Prairie Provinces are each home to about 14 percent of that country's estimated 1.5 million curlers. Altogether, the twenty existing clubs in the seven Great Plains states with curling (including western Minnesota) have approximately 1,500 curlers out of 15,000 nationwide. North Dakota's twelve clubs are the largest concentration in the region. The Drayton Curling Club, whose first "home" was a stretch of ice on the Red River, celebrated its centennial in 2001. The Great Plains states have been home to twenty-four national curling champions in the history of U.S. men's, women's, and mixed events, including nine junior men's teams, two of which won world titles.

Manitoba has produced twenty-five national men's champions alone since the Canadians first contested for a title in 1927. Saskatchewan boasts eleven women's champions and is also home to the team that won the women's gold medal in the 1998 Winter Olympic Games in Nagano, Japan, where curling first became a full-medal sport. Alberta also has many national champions, including eighteen men's and thirteen junior men's teams. Altogether, the three provinces have also welcomed home thirty-one world curling champions.