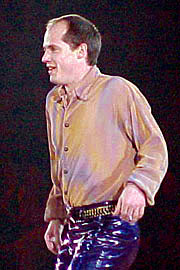 "Kurt Browning skates to 'Brick House' during a Stars on Ice performance at the Cumberland County Civic Center in Portland, Maine." (Photo taken by NightThree on April 8, 2000.)

Kurt Browning, sometimes called "Gene Kelly on Ice," set a new standard in the world of figure skating. The Canadian earned worldwide popularity due to his remarkable talent, showmanship, and sense of humor.

Born on June 18, 1966, in Rocky Mountain House, Alberta, Browning grew up playing hockey in Caroline, Alberta. He showed a natural talent for figure skating and at the age of sixteen moved to Edmonton to train. On March 25, 1988, he added his name to the Guinness Book of World Records by becoming the first person to successfully land a quadruple jump in competition. This athletic ability, in addition to his artistry, led to four Canadian championships and four world championship gold medals. The only amateur achievement that eluded him was an Olympic medal. The 1994 Olympic Games were not unrewarding, however, as he was given the honor of carrying the Canadian flag at the opening ceremonies.

The town of Caroline is proud of its hometown hero, and Browning still maintains his connections to the Plains. He serves as the honorary spokesperson for KidSport Society of Alberta, dedicated to "overcoming the obstacles that prevent some young people from playing sport." He was also proud to be named honorary captain for the Edmonton Oilers hockey team. In 1996 Kurt married Sonia Rodriguez, a principal dancer with the National Ballet of Canada, and they now live in Toronto, Ontario, when he is not on the road entertaining.