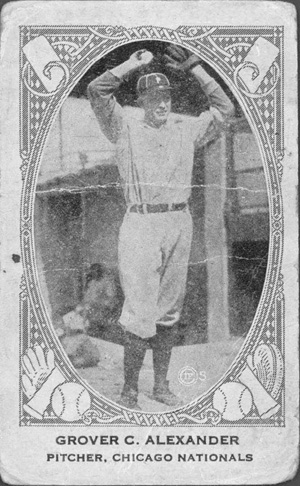 One of baseball's greatest pitchers, Grover Cleveland Alexander was inducted into the National Baseball Hall of Fame in 1938. His twenty-year career produced 373 victories, tying him with Christy Mathewson for most victories by a National League pitcher and placing him behind only Cy Young and Walter Johnson for major-league wins.

The son of an Elba, Nebraska, farmer, Alexander was born on February 26, 1887. His major-league career began in 1911 with the Philadelphia Phillies. At the end of his rookie season, he led the league in victories, shutouts, complete games, and innings pitched. From 1913 to 1917 Alexander's record was a stunning 143 wins and 50 losses. In the 1915 World Series he pitched the Phillies' only victory.

From 1919 to 1925 Alexander was the mainstay of the Chicago Cubs pitching staff. Placed on waivers in 1926, he was picked up by the St. Louis Cardinals and helped them clinch a pennant. The 1926 World Series against the New York Yankees produced Alexander's most remembered achievement, as he won two games and, in game seven, struck out Tony Lazzeri with the bases loaded.

After his 373rd victory in 1929, Alexander went on a drinking binge that ended his season. With the Phillies in 1930, he lost three starts, and his major-league career was over. Drinking problems marred his remaining years. He died in St. Paul, Nebraska, on November 4, 1950. A 1952 film biography starring Ronald Reagan, The Winning Team, highlighted Alexander's 1926 World Series heroics while downplaying his alcoholism.