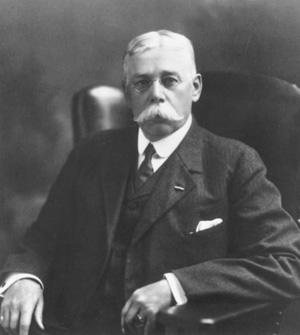 U.S. senator Francis Emory Warren used his seniority and committee assignments to encourage economic development in the West and to build an effective Republican political machine in Wyoming. Born on June 20, 1844, in Hinsdale, Massachusetts, Warren attended local schools and won the Congressional Medal of Honor for his service with a Union Army regiment during the Civil War. Moving westward, he arrived in Cheyenne in 1868, where he clerked in a furniture store. Soon, he purchased and expanded the enterprise (renaming it the Warren Mercantile Company) and established the Warren Land and Livestock Company and a far-flung set of investments in banks, railroads, and public utilities. Possibly the wealthiest individual in Wyoming, Warren maintained close ties to the powerful Wyoming Stock Growers Association and served as president of the National Wool Growers Association.

Business interests quite naturally attracted Warren to politics. Appointed territorial governor in 1885, he sided with business interests and Chinese workers during the Rock Springs massacre of 1885. In 1890 Warren was elected the state's first governor, but he resigned days later after being chosen U.S. senator. He would serve more than thirty-seven years in the Senate, a record unsurpassed until 1964. Warren's seniority, his energy, his unusual knack for political organization and patronage, and his close attention to the state's business interests brought him extensive influence both in Washington and in Wyoming.

Warren chose to use that influence primarily to benefit his state and region. Rejecting charges of conflict of interest, he worked assiduously for high tariffs on raw wool, hides, and beef–-psitions that clearly favored the sheep and cattle industry. Warren supported federal leasing policies designed to accommodate both interests, he opposed policies that would block fencing on the federal domain, and he promoted the Carey Act of 1894 and a host of irrigation and reclamation projects to advance western interests. He lobbied shamelessly for the construction of federal buildings in Wyoming and used his position on the Senate Military Affairs Committee to enhance Fort Mackenzie in Sheridan, Wyoming, and Fort D. A. Russell (later F. E. Warren Air Force Base) in Cheyenne. As chair of the Senate Appropriations Committee in the 1920s, Warren worked for government economy and high tariffs.

Warren died in Washington dc on November 24, 1929. He was married twice, and a daughter by his first marriage became the wife of Gen. John J. Pershing.