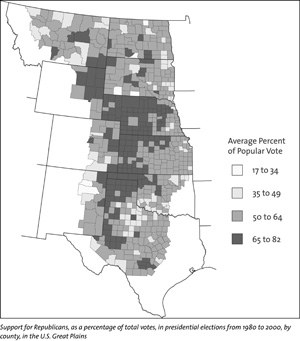 Support for Republicans, as a percentage of total votes, in presidential elections from 1980 to 2000, by county, in the U.S. Great Plains

The voting patterns of the residents of the American Great Plains demonstrate both the distinctiveness of the political culture of the Great Plains in relation to the political cultures of other major regions of the United States and the existence of discernible local differences of political attitudes and habits within the region itself. Such place-to-place variations in political culture and behavior are facilitated, and even in some respects encouraged, by the federal democratic structure of American governance in which national, state, and local governments each have distinct though overlapping roles and responsibilities. The need for coordination across the three major levels of the American federal system has contributed to the predominance of a two-party system of electoral competition at federal, state, and local levels, although by no means are all electoral contests fought under party labels. The use of single-member-district plurality-system elections to choose members of the U.S. Congress, state legislatures, and many local councils or commissions also encourages two-party competition, as does the complex indirect Electoral College mechanism for electing the U.S. president. But even so, the pressures toward political diversity from one region or locality to the next can and often do outweigh those pressures that tend toward political uniformity within the American federal republic.

Thus, coins engraved with the slogan "e pluribus unum" are legal tender in the American Great Plains, just as elsewhere within the United States, but there is not one mind among Great Plains residents nor among residents of other regions over issues such as the proportion of these coins that ought to be collected in taxes, or the ends toward which the tax monies ought to be expended. Of course, elections are meant to provide citizens their most important means of expressing their views regarding just these sorts of issues.

When it comes to actually exercising their rights and obligations of citizenship at the polls, residents of the American Great Plains are among the most energetic in the United States. If national voter turnout in presidential elections is expressed as a proportion of voting-age population, which facilitates comparisons, it can be noted that an average of 52.1 percent of potential voters in the nation as a whole participated in the six presidential elections from 1980 to 2000. In comparison, the state-level average for the ten states of the Great Plains was a presidential voter turnout rate of 56.2 percent. Thus, when the ten Great Plains states are considered together, it is found that the region's potential voters have been notably more likely to exercise their electoral franchise in recent presidential elections than voters in the nation as a whole.

But it is also important to observe that conspicuous geographical differences exist within the region itself. In particular, Central and Northern Plains states tend to have much higher turnout rates than do Southern Plains states. On average for the 1980 to 2000 presidential elections, more than 60 percent of potential voters in the northernmost Plains states of Montana (64.5 percent), North Dakota (62.2 percent), and South Dakota (62.8 percent) cast ballots, compared with fewer than 50 percent of potential voters in the southernmost states of New Mexico (49.3 percent) and Texas (45.2 percent). And the north-to-south latitudes of the remaining states almost perfectly correlate with their average turnout levels as well, including those of Colorado (56.6 percent), Kansas (56.7 percent), Nebraska (56.7 percent), Oklahoma (52.0 percent), and Wyoming (56.8 percent). This pattern of lower voter participation in the Southern Plains has appeared for most presidential elections of the twentieth century, though differences have diminished since the Voting Rights Act of 1965 outlawed overt efforts to disenfranchise potential minority voters.

The effects and aftereffects of the Civil War and Reconstruction continued to be manifested in the geographical patterns of party preferences within the Great Plains well into the twentieth century. Voters in former Confederate or Confederate-leaning states south of the thirty-seventh parallel, which separates Colorado and Kansas from New Mexico and Oklahoma, usually supported Democratic candidates much more heavily than Republican candidates. In contrast, voters in former Union or Union-leaning Great Plains states north of the thirty-seventh parallel were usually much more inclined to support Republican candidates, although there were notable exceptions during the Greenback and Populist revolts of the 1880s and 1890s. Roughly twenty percentage points usually separated voters to the north and south of this line right through the New Deal era, when about three-quarters of Southern Plains voters supported Franklin D. Roosevelt's Democratic candidacy. In contrast, Central and Northern Plains voters, who had given Roosevelt a comfortable majority of their votes in 1932 and 1936, gave greater preferences to Republicans Wendell L. Willkie in 1940 and Thomas E. Dewey in 1944.

The second half of the twentieth century saw significant changes in the geography of voting within the region. The nomination of World War II hero Gen. Dwight D. Eisenhower of Kansas as the Republican presidential candidate in 1952 served as a catalyst for change in the Southern Plains. Despite their traditional Democratic loyalties, small majorities of voters in New Mexico, Oklahoma, and Texas joined greater majorities north of the thirty-seventh parallel to give Eisenhower a sweeping victory throughout the Great Plains over his Democratic rival, Adlai E. Stevenson, in 1952. In 1956 Eisenhower's continued popularity shrunk the difference in aggregate Republican voter support north and south of the thirty-seventh parallel from thirteen to seven percentage points.

Although a majority of voters in the Great Plains have supported Republican candidates in presidential elections in recent years, there nevertheless exist notable locational variations in patterns of voter preferences at smaller geographical scales within the region. As shown on the map of average Republican support by county for the six presidential elections from 1980 to 2000 (see p. 693), there is a large and conspicuous subregion of very high Republican support that extends northward from the Texas Panhandle across western Kansas, throughout central and western Nebraska, and into eastern Wyoming. Within this zone, which is economically dominated by ranching and irrigated agriculture, county-level averages of 65 to 82 percent of voters supported Republican candidates in the 1980 to 2000 elections. Other smaller concentrations of very high average Republican support also can be found in each of the Great Plains states. Even in New Mexico, which has been the most Democratic state in the region, about half of all counties show average levels of Republican support of 50 percent or more for the 1980 to 2000 elections. Indeed, of the total of 824 counties in the Great Plains states, 626, or about three out of four, exhibit Republican majorities on average for the 1980 to 2000 elections. The remaining one out of four counties that average less than majority levels of support for Republican presidential candidates tend to be found along the margins of the Great Plains proper. The shadings associated with counties in hillier subsections of southeastern Oklahoma and eastern Texas, together with those along the eastern flank of the Rocky Mountains near the western margin of the Plains, suggest a tendency toward greater Democratic support with greater local topographic relief. Traditional patterns of party sentiment associated with marginal agricultural or nonagricultural economic activities that characterize these areas have perhaps been reinforced by the in-migration of persons of retirement age in recent years. In several states, including the Central Great Plains states of Kansas, Nebraska, and Colorado, isolated counties with larger cities or higher proportions of college or university populations tend to show lower levels of average Republican support than do surrounding agrarian counties. But the counties exhibiting the very lowest levels of Republican support, involving averages of 17 to 34 percent Republican voting in the 1980 to 2000 presidential elections, usually are those with very high proportions of Native American or Latino populations. Indeed, the two Plains counties with the very lowest levels of Republican support in 1980 to 2000 are Shannon County, South Dakota, which contains the Pine Ridge Indian Reservation, and Starr County, Texas, a generally rural county in the lower Rio Grande Valley. In these economically depressed counties, an average of four of five voters cast their ballots in support of Democratic candidates in the presidential elections from 1980 to 2000.