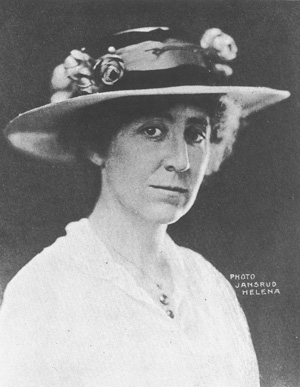 Jeannette Rankin, the first woman elected to the U.S. Congress (1916), was born on a ranch near Missoula, Montana Territory, on June 11, 1880. She was the eldest of seven children of Olive Pickering Rankin and John Rankin, who was successful in the ranching and lumbering business. Her early development and subsequent career were no doubt influenced by the relative remoteness of Montana, the freedom and challenges of frontier life, and the harsh environmental demands, all of which required a strong and independent character.

Following graduation from the University of Montana with a bachelor of science degree in biology in 1902, she worked for a time as a country schoolteacher and as a part-time seamstress. In 1908 she left Montana to study at the New York School of Philanthropy (now the Columbia University School of Social Work), and after a brief stint as a social worker in Montana and Washington, she entered the University of Washington in 1909. She became active in the successful state campaign for women's suffrage in 1910, which energized her and helped define her subsequent career, focusing on suffrage and then incorporating pacifist issues.

The approval by Montana of female suffrage in 1914 set the stage for her own campaign for one of Montana's at-large seats in the U.S. House of Representatives as a progressive Republican. Her previous work for suffrage in Montana gave her contacts, organizational skills, public speaking ability, and a knowledge of Montana voters that served her well. In her campaign she traveled the vastness of the state by train and automobile (which she drove herself) to speak to groups as disparate as mountain miners, Plains farmers, and women's groups. She spoke on street corners, in lumber camps, union halls, and kitchens. Her brother, Wellington, who became a highly successful lawyer and prominent Republican in Montana, managed her successful campaign.

Jeannette Rankin served two terms in Congress–separated by twenty years–where she worked hard for reform legislation ranging from women's issues to various problems of specific concern to western states. She was defined as a pacifist when her congressional terms (1917-19 and 1941-43) coincided with the outbreak of the two World Wars, and she was the only member of Congress to vote against U.S. entry into both of them. Whereas she received considerable support for her stance in 1917, she was accorded very little support in the different atmosphere of 1941. Failing to win reelection each time, she devoted her efforts to active involvement in various pacifist organizations and to world travels.

She returned briefly to public life in 1968, as part of a women's coalition called the Jeannette Rankin Brigade, to march on Washington in protest of the Vietnam War. Even as she passed the age of ninety, she continued to give interviews and speeches opposing the Vietnam War and supporting women's rights. In 1971 the National Organization of Women named her as the first member of the Susan B. Anthony Hall of Fame, acclaiming her contribution to the cause of women's rights. But her health was deteriorating, and she died in Carmel, California, on May 18, 1973.

Giles, Kevin S. Flight of the Dove: The Story of Jeannette Rankin. Beaverton OR: Touchstone Press, 1980.