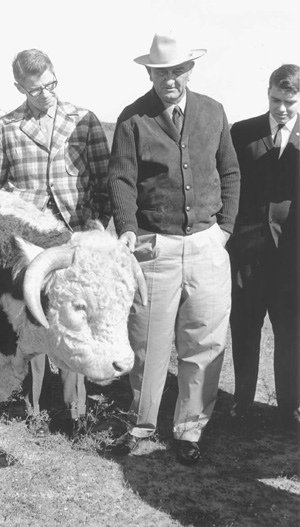 Lyndon Baines Johnson, thirty-sixth president of the United States, was one of the most controversial and important chief executives since World War II. Born on a small farm in the scenic Texas Hill Country near the community of Stonewall on August 27, 1908, Johnson grew up in a family where politics and public affairs took center stage. He married Claudia Alta "Lady Bird" Taylor in 1934 while serving as secretary to Texas congressman Richard Kleberg. Johnson served as Texas director of the National Youth Administration in the 1930s and won his first election to Congress in 1937 as a New Deal Democrat and an ardent Franklin Roosevelt supporter. He subsequently won a seat in the U.S. Senate in 1948 by narrowly defeating Gov. Coke Stevenson in one of the most controversial elections in modern political history.

Johnson became Senate majority leader in 1955 and gained recognition for his ability to pass legislation while cooperating with the Republican presidential administration. In 1960 he ran as John Kennedy's vice president to provide experience and balance to the ticket. His presence on the ballot helped deliver key states like Texas, while increasing Democratic votes throughout the Great Plains states. Johnson unexpectedly achieved his goal of the presidency following Kennedy's assassination in Dallas on November 22, 1963. With the sentiment of the nation behind him, Johnson pushed the landmark Civil Rights Act of 1964 through Congress as he planned his election-year strategy.

The Great Plains had provided a bastion of political support for the Republican Party since the demise of the Populist movement. Between 1952 and 1996 the majority of states in the region supported Republican presidential candidates. The only exception was 1964, when Lyndon Johnson steamrolled Republican Barry Goldwater in one of the most lopsided presidential elections in history. In a whirlwind campaign tour through the area, Johnson quoted Texas historian Walter Prescott Webb in saying, "America's frontier is different. It lies inside our country, not at the edge." Johnson rode a wave of sentiment and popularity in sweeping the electoral votes of the Great Plains in 1964, bringing many new Democratic congressmen to Washington on his coattails.

With his popular mandate and an overwhelming congressional Democratic majority, Johnson pushed legislation at a frantic pace. The War on Poverty, the Voting Rights Act, Medicare, Head Start, the National Endowment for the Arts, the National Aeronautics and Space Administration (NASA), and a multitude of other initiatives were launched, greatly expanding the federal presence at every level. His "Great Society" programs exceeded those of the New Deal, as Johnson crafted an agenda that fundamentally reshaped American society and culture. Johnson also wanted an impact on the land itself. As part of his "New Conservation" efforts, Congress passed landmark environmental legislation: the Clean Air Act, the Wilderness Act, the Endangered Species Act, the Water Quality Act, and many more that brought long-term change to America's heartland. Immensely impressed with this record, Sen. Clinton Anderson (Democrat–New Mexico) called Johnson "the smartest politician I ever knew."

Johnson launched new programs to aid rural America and agriculture. The Food Stamp Act reduced farm surpluses and increased income while setting up a popular program that enabled less-fortunate Americans to purchase basic commodities. More than $2 billion went to the Rural Electrification Administration (REA) to extend electricity and telephones. The largest loan in REA history allowed a North Dakota cooperative to provide electricity to over one million residents in eight states. Personal income levels in the Great Plains during the Johnson years increased in a region still largely dependent on agriculture.

As part of his civil rights program, Johnson sought to bring Native Americans into the national mainstream. In a reversal of federal policies in the 1950s that attempted to relocate Native Americans from their lands to cities, Johnson's administration pushed for aid to expand education and economic opportunities and placed a new emphasis on Indian cultures. More than $10 billion in federal aid went to Indians in an attempt to reduce poverty and unemployment that ran as high as 85 percent on some reservations. He appointed Robert L. Bennett, an Oneida Indian, as the first Native American to head the Bureau of Indian Affairs in the twentieth century. In 1968 Johnson's speech on "The Forgotten American" urged approval of the "Indian Bill of Rights." The legislation extended protection of the U.S. Constitution for Indians in their own tribal constitutions amid a resurgence of Indian sovereignty.

However, foreign affairs diverted Johnson's attention, as he inherited Kennedy's commitment to Vietnam. Johnson expanded the nation's military commitment, and by 1965 the United States assumed primary responsibility for the Vietnam War. Vietnam soon replaced his domestic agenda as the cost of maintaining the war forced the administration to choose guns over butter. Opposition steadily increased at home as casualties mounted with no discernible end to the conflict. Faced with rising opposition within Congress and his own party, coupled with his overall decline in popularity, Johnson surprised the nation on March 31, 1968, when he announced on television that he would not seek reelection, and he called for renewed efforts for peace. Like many others, Sen. Gale McGee (Democrat-Wyoming), a Johnson stalwart, reacted with shock to Johnson's decision: "I had to listen to the replay again to still believe it," Mc- Gee said. McGee and others were soon disappointed, as the peace initiatives failed to end the fighting in Vietnam before Johnson left office and Democratic presidential nominee Hubert Humphrey lost a close election to Republican Richard Nixon in November 1968.

Johnson's liberal nationalism left a legacy of achievement but opened the door for conservative reaction and political realignment as a result of his ambitious domestic agenda. His many accomplishments are now part of the nation's heritage and illustrated his deep conviction to civil rights and economic opportunity to all Americans. His decisions concerning Vietnam demonstrated the limits of American power during the cold war era. In 1969 Johnson and his wife, Lady Bird, retired to their ranch, where he lived until a heart attack ended his life on January 22, 1973.