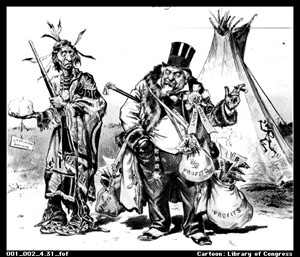 In both Canada and the United States, Indian agents were responsible for implementing federal Indian policy. They were the government's representatives on reservations and reserves and, as such, they wielded great power over Native peoples, even to the extent of usurping their traditional political authority, suppressing religious practices, and transforming social roles.

In the United States, Indian policy was transmitted from a commissioner of Indian Affairs (operating, after 1849, from the Office of Indian Affairs in Washington DC) through regional superintendents, to agents, who were responsible for a single tribe or a group of tribes. The agents, in turn, supervised teachers, blacksmiths, farmers, and other agency employees. In the early nineteenth century in the U.S. Great Plains, agents like John Dougherty, who was in charge of the Upper Missouri Agency from 1827 to 1837, were roving ambassadors who strived to maintain peace and to obtain Indian lands. In the second half of the nineteenth century agents took up residence on their designated reservations and promoted the government's assimilation policy.

In Canada, a separate Department of Indian Affairs was not established until 1880, following the Indian Act of 1876. Federal policy (the federal government was confirmed in its authority over First Nations in the Constitution Act of 1867) was formulated in Ottawa, in the "Inside Service" of the Department of Indian Affairs. From there it passed through regional superintendencies (there were three such districts–headquartered at Battleford, Qu'Appelle, and Calgary–in the Prairie Provinces in 1897) to agents on the numerous reserves that were established after the treaties of the 1870s.

In the early nineteenth century, in the United States, Plains Indian agents were often traders who moved into the Indian service when the fur trade collapsed. Later, their origins were more diverse, but in both Canada and the United States they tended to come from eastern states and provinces, and they were often unsuited for the job. Political patronage played a major role in appointments. In the late 1860s Quakers and other religious denominations were put in charge of many of the agencies in the U.S. Great Plains in an effort to introduce some honesty into the service; a similar transition occurred in the Prairie Provinces in the 1870s. Military officers were also appointed as agents on some U.S. Plains reservations in the late 1860s and 1870s.

Some agents did their jobs honorably amid the terrible living conditions that prevailed on the reservations and reserves. They were convinced that the only way the Native peoples could survive was by becoming individualized Christian farmers who made a living on their own pieces of private property. Many others were corrupt, taking advantage of the remoteness of their situations by skimming their charges' annuities or by colluding with settlers to steal Indian lands. Because of dismissals for corruption or ineptitude and resignations caused by the hardships of living in such isolated, desperate situations, agent turnover was high. At the Blackfoot Agency in Montana, for example, ten agents came and went in the thirteen years from 1863 to 1876; to the south at the Crow Agency, eight agents served in the nine years from 1869 to 1878. Such frenetic change did not inspire confidence in federal policy.

In the late nineteenth century and early twentieth century, agents imposed the assimilation policy with increasing force. After 1881 on the Canadian reserves, agents were given the powers of justices of the peace and encouraged to use them to control the Indians' behavior, including restricting them to the reserves by enforcing antivagrancy laws. South of the international boundary, agents threatened to withhold the Indians' annuities if they did not put their children in schools or work in the fields. In both countries, agents increasingly took over the political decision making that had previously resided with tribal councils.

In the United States, the post of Indian agent was abolished in 1908 by commissioner of Indian Affairs Francis Leupp. Thereafter, doctors and teachers, officially called superintendents, took over the agents' duties. Leupp believed that they would be more successful in promoting assimilation. On Canadian reserves, agents remained the federal government's representatives, with comprehensive powers to regulate the Indians' lives, until the 1960s. Thereafter, agents were gradually removed from the reserves. The position no longer exists in the Department of Indian Affairs.

Abbott, Frederick H. The Administration of Indian Affairs in Canada. Washington DC: Board of Indian Commissioners, 1915.

Report of the Royal Commission on Aboriginal Peoples. Ottawa: rcap, 1996.