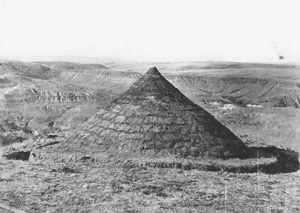 At just under 740 miles, the forty-ninth parallel separating the Prairie Provinces from the Northern Plains states is part of the longest continuous unguarded boundary line in the world. The forty-ninth parallel bisects a borderland region characterized by physical uniformity in its grassland ecosystem and continental climate and by socioeconomic affinity in its predominantly rural and agrarian economy, low population density, and geographical isolation from markets. The kinds of interactions taking place over time, as well as similar geographical conditions, have added to the synthesis within this borderland region. North-south intermingling occurred well before European settlement, as the American and Canadian fur trading systems converged within a frontier context in which the border, first established in an 1818 treaty between the United States and Great Britain, was relatively meaningless. This unsurveyed line, stretching from the Lake of the Woods in southwestern Ontario to the Rocky Mountains and later extended to the Pacific Coast, was ignored by the buffalo and by the whites, Native peoples, and Métis who hunted them. Further integration in the nineteenth century was ensured by the development of north-south trade links between the Hudson's Bay Company and St. Paul and Chicago capitalists who competed for control of the Northern Plains and saw the monopoly of the British firm in Canada as an impediment to their imperialist schemes. Fort Benton, Montana, located at the head of navigation on the Missouri River and functioning as the gateway to the Whoop-Up Trail to Fort Macleod and Calgary, dominated the commerce of the Canadian Plains for twenty-five years (1858-83).

Even after the boundary line was delineated in 1874 by a joint British and American commission, north–south flows continued, primarily in terms of goods and then people. Yet immediately the boundary acquired significance, as it became the focus for changing relations taking place within the borderland region. It cut across the hunting grounds of Native peoples and Métis and erased their former territories. Ironically, these groups viewed it as a "Medicine Line" because it represented refuge from persecution by whites on the other side. During the 1870s the whiskey trade with Natives caused tension along the border and was used by Canadian nationalists to fuel anti- American sentiment. In this context the fortyninth parallel came to be viewed by Canadians as a "shield" to America's "manifest destiny," while for most Americans, the border shared with Canada was too far removed to acquire much notice at all.

At the beginning of the twentieth century the Prairies held the promise of the "Last Best West" for Canadians, Europeans, and a considerable number of Americans, while the Northern Plains was increasingly viewed as a remote place, a region to be bypassed by those seeking opportunity in the Far West. While integration within the Northern Plains and Prairie borderland region continued to occur because of a common hinterland, migration flows, the diffusion of technology and ideas, and the evolution of capital relations across the border, the east-west flow of trade and migration into the region paralleling the Canadian Pacific Railway and the Great Northern Railroad served to form national ties that counterbalanced the continuing north-south connections. And even though the border was obscured by the migration of settlers from eastern North America and Europe who carried with them an array of social and economic affiliations, their different settlement histories, loyalties, political cultures, urban systems, and core-periphery relations ensured divergence between the Northern Plains and Prairies.

The forty-ninth parallel has served as a major symbol of the predominant east–west development in both countries, and for Canadians it takes on added importance as a territorial axis, defined in terms of their relationship with the United States. In this context, this artificial line has become a matrix for Canadian culture, at least an Anglo-Canadian culture, which is by its nature regional in composition as well as in origin. Today, however, the forty-ninth parallel as a spatial metaphor has become blurred in a world where the forces of new technologies, globalization, and "timespace compression" have challenged the traditional Canadian view of the border as a territorial symbol of sovereignty and separation. In this new global environment, place as defined by borders is no longer the essential element of identity. Regional differences are diminishing in the face of homogeneous economic forces and a global culture, as is the importance of cartographic lines and compass points that enable inhabitants of this region, regardless of which side of the forty-ninth they inhabit, to orient themselves in time and space.