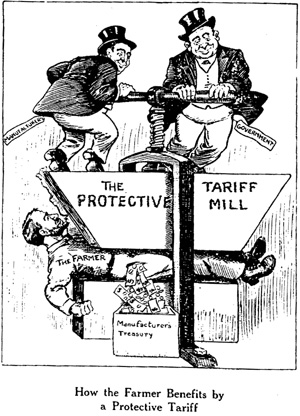 Political cartoon, "Putting on the Screws"

Most of the area covered by Canada's three Prairie Provinces was purchased by the federal government from the Hudson's Bay Company in 1868. The Canadian Plains was a sparsely populated frontier, and the government was anxious to settle the region quickly and uniformly. The North-West Mounted Police force was established, and the government in Ottawa embarked on an aggressive campaign to populate the area. To achieve this goal, control over the land and natural resources of the western interior was retained by the federal government. In a sense, the three Prairie Provinces are "Children of Confederation" in that they had not existed as self-governing colonies prior to Canadian Confederation in 1867. Manitoba attained provincial status in 1870, but Saskatchewan and Alberta did not become provinces until 1905.

The way in which the Prairie Provinces became part of Canada has given rise to the phenomenon of western alienation. This includes specific complaints about discriminatory treatment, as well as the pervasive feeling among its citizens that Manitoba, Saskatchewan, and Alberta are second-class provinces. They had to wait until 1930 to gain ownership of their land and natural resources. In the American Plains states and in the West more generally, federal ownership and control over large tracts of land created similar resentment.

Settlers to the Prairies came in waves between the turn of the twentieth century and World War II. They came with high expectations fed by extravagant advertising campaigns launched by the federal government and the Canadian Pacific Railway. The Prairies were described as a veritable Garden of Eden. Many newcomers were defeated by the weather, the uncertainty of the grain trade, and difficulty in coaxing a crop out of virgin soil.

Ottawa's policies on tariffs, its decisions on the railway, and its primary role in immigration and homesteading had a crucial impact on the evolution of the Prairie Provinces. Until the onset of World War II, these provinces were isolated from the rest of the country and united in their dependence on the wheat economy. A shared sense of grievance added to their cohesion: national policies favoring Central Canada, particularly in the early years, fueled the perception that the federal government was a remote, insensitive instrument of the manufacturing sector located at the center. There was some justification for these sentiments, since federal domination of the region in its formative years was unparalleled in the rest of the country.

Common experiences led to a cross-fertilization of ideas on the agrarian frontier on both sides of the international boundary. They were part of the raw material from which populism and nonpartisan ideals were constructed. Ideas popularized by the Nonpartisan League, which originated in North Dakota, were picked up on the Canadian Plains. League candidates were unsuccessful in elections during World War I, but nonpartisan sentiments turned out to be more durable. Canada's political system proved more permeable to new political parties spawned by Prairie discontent; some survive to this day.

More than a century after Canadian Confederation, an identity of interest no longer binds the Prairie Provinces. Their economies have diversified, and powerful provincial governments now articulate the interests and air the grievances of their citizens. However, it is still possible for provincial premiers to mobilize the population by fanning the flames of western alienation. For example, natural resource ownership remains a flashpoint in Alberta, which is home to the bulk of Canada's conventional petroleum resources. Any hint of federal intrusion into this industry is vigorously resisted. There has been minimal change in the division of powers. However, the importance of the powers conferred on the provinces has increased dramatically, while federal responsibilities have declined in importance.

Hinterland status and the problem of being a relatively small population continue to frustrate citizens of the Prairies, to whom the federal government seems as remote as it was before technology compressed time and space.