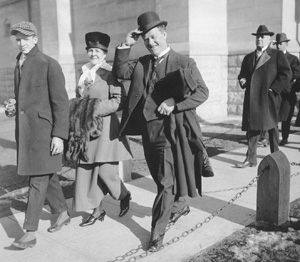 William Jennings Bryan, known as the "Boy Orator of the Platte" and the "Great Commoner," was a political leader with uncommon oratorical abilities and an affinity for the religious and rural classes. Born on March 19, 1860, in Salem, Illinois, Bryan idolized Abraham Lincoln, who had been born nearby. In Lincoln, Bryan saw a public servant with a strong dedication to the common people and a strong faith in Christian morality. Bryan adopted both.

Bryan attended Illinois College, where he met his wife, Mary Baird, and graduated from Chicago's Union College of Law in 1883. In 1887 he relocated to Lincoln, Nebraska, which would be his home until 1921. He established a law office with his friend Adolphus R. Talbot and practiced until 1895, while establishing himself politically among Nebraska's Democratic leadership. Less business-oriented than other Nebraska Democrats, such as J. Sterling Morton, Bryan was chosen to run in the 1890 congressional elections to appeal to the increasingly political Farmers Alliance, which would evolve into the Populist, or People's, Party. Although traditionally a Republican state, Nebraska elected Bryan to his first political office. He served in the House of Representatives from 1891 to 1895. From 1894 to 1896 he also edited the Democratic Omaha World- Herald.

In 1896 Bryan addressed the Democratic National Convention in Chicago, giving his famous "Cross of Gold" speech, a stirring distillation of the complaints of agrarian and urban people who felt defeated by America's rapid industrialization and entry into world markets. The electrifying speech won Bryan the presidential nomination at age thirty-six. Shortly thereafter, the Populist Party also nominated Bryan but attempted to maintain its independence by nominating a different vice presidential candidate. During his campaign Bryan virtually ignored the Populist Party, although he did champion its ideas, chief among them the remonetization of silver. In part due to fears of political and economic disruption, William McKinley won the election, but Bryan would now be the perennial Democratic presidential candidate.

In 1898 Bryan organized a regiment to fight in the Spanish-American War, but he remained in Florida while the unit went on. Bryan won the Democratic nomination for the presidency again in 1900; his campaign attacked America's imperial role following the Spanish-American and Philippine-American wars. American voters rejected Bryan's antiimperialism and reelected McKinley by an even larger margin than in 1896. In 1901 Bryan established The Commoner, which advanced his liberal political views and conservative religious beliefs.

Bryan received the Democratic presidential nomination a third time in 1908 but lost to Teddy Roosevelt's chosen successor, William Howard Taft. From 1913 to 1915 Bryan served as the secretary of state under President Woodrow Wilson. He resigned in 1915 because he believed that, despite Wilson's professed neutrality toward the belligerent powers in World War I, his pro-British actions would lead America into war. Although Bryan never won the presidency, his influence was immense. He traveled throughout the country and the world speaking to great crowds on various social and political issues, including prohibition and women's suffrage (both of which he supported).

Bryan lived in Lincoln until 1921, when he moved to Florida. In the last decade of his life his religious conservatism overshadowed his liberal political beliefs. His final public appearance was in Dayton, Tennessee, as prosecuting lawyer in the trial of John Scopes, who had been charged with violating a Tennessee law prohibiting the teaching of the theory of evolution in the public schools. The opposing counsel, Clarence Darrow, criticized Bryan's literal interpretation of the Bible, upon which the Tennessee law relied, and placed Bryan on the stand, forcing him to admit to several biblical contradictions. The state won the case, but Bryan's own often self-contradictory testimony highlighted the growing gap between religious fundamentalism and secularism in the United States.

William Jennings Bryan died on July 26, 1925, in Dayton, Tennessee, just days after the Scopes trial. When Bryan championed the cause of the poor rural and urban classes in 1896, he was seen as a radical voice calling for deep societal change, but by 1925 his was a conservative voice. By the close of his life he had come to symbolize American divisions regarding religion. Some found in him a perfect champion of religious conservatism, while others, such as H. L. Mencken, found him to represent intolerant religious extremism. Always controversial, Bryan's career saw his transformation from a crusader for the rights of the common people against organized wealth to an anti-imperialist and, finally, to a proponent of biblical creationism.