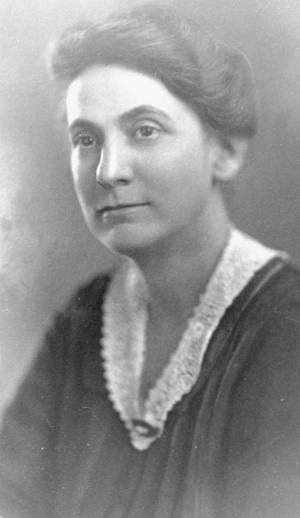 Grace Abbott was perhaps the greatest champion of children's rights in American history. She was born (November 17, 1878) and raised in Grand Island, Nebraska. Abbott was part of an accomplished pioneer family. Her father was the first lieutenant governor of Nebraska, her mother was a leader of the early Plains women's suffrage movement, and her sister, Edith, was the first woman in American history to become the dean of a major university graduate school, the University of Chicago. Grace Abbott herself was the first woman nominated for a presidential cabinet post, secretary of labor for Herbert Hoover, and the first person sent to represent the United States at a committee of the League of Nations.

As chief of the U.S. Children's Bureau from 1921 to 1934, Abbott was the highest ranking and most powerful woman in the U.S. government when the Depression hit. She was the only trained social worker at the top political levels in Washington, DC in those disaster-filled days. Accordingly, she exerted a crucial influence on the momentous relief and welfare efforts that were developed in response to the crisis.

A trusted associate of Nobel Prize–winner Jane Addams, Abbott also made significant contributions to the field of immigration rights during her tenure as director of the Immigrants Protective League of Chicago from 1908 to 1917. She was a vigorous leader in the fight against child labor and a longtime crusader for improved children's health care. She was among the first female broadcasters to a national audience, with "Your Child" on NBC in the 1920s, and her trailblazing social service work has been credited with leading the way to the creation of the Social Security Act and the United Nations' unicef program.

Abbott was a woman of intriguing contradictions: a lifelong Republican Party member and a lifelong liberal activist; a native of the Plains frontier who spent much of her adult life in the poorest immigrant quarters of urban Chicago; and an unmarried woman who was nicknamed "the mother of America's 43 million children."

Abbott's courageous struggles–to protect the rights of immigrants, to increase the role of women in government, and to improve the lives of all children–demonstrate a remarkable human ability to seek out suffering and to do something about it. She was a bold and defiant woman who changed our country more profoundly than have many presidents.

Throughout her career, Abbott never lost her profound love for her Great Plains homeland, which she felt had so vitally contributed to her character. As Edith Abbott wrote of her sister, "To the end of her life, Grace was a daughter of the pioneers–with the vigorous 'dash' of the pioneer who is able to accept temporary defeat in the confident belief in ultimate victory . . . even when the odds on the other side are very great."

Edward Keating, congressional representative from Colorado, summed up the feelings of innumerable Americans when, following Abbott's death on June 19, 1939, in Chicago, he stood on the floor of the Congress and said, quite simply: "To me there was something about Grace Abbott which always suggested Joan of Arc."

Costin, Lela B. Two Sisters for Social Justice: A Biography of Grace and Edith Abbott. Urbana: University of Illinois Press, 1983.